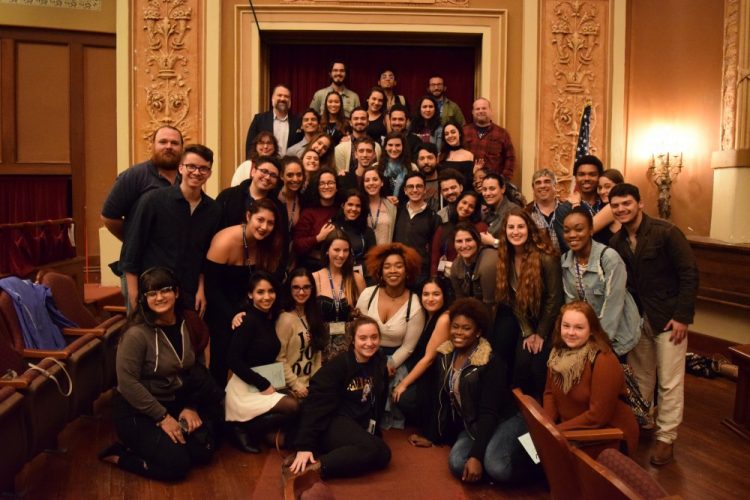 During the festival, held on the campus of Georgia Southwestern University, students presented their work to industry professionals, participated in workshops, attended performances, and networked with other theatre artists from across the Southeastern United States.

Eleven students took home 15 awards for their work. Many of those awards came with cash prizes and scholarships to attend other festivals and events.

Three students were awarded scholarships to attend the National KCACTF in Washington, DC. Seniors Chelsea Cosio, Melissa Lopez, and Apriah Williams will be attending the festival at the Kennedy Center this April – the most FIU has ever sent to the DC festival.

Chelsea Cosio won the Stage Management Fellowship for her work on last semester’s Ubu Rex. She was selected out of over 50 participants and after several rounds of interviews. This is the third year in a row that an FIU Theatre student wins this prestigious fellowship after Liana Sierra and Luisa Rodriguez won it the past two years.

Melissa Lopez won the Stage Directors & Choreographers (SDC) Student Directing Fellowship. She was one of three FIU Theatre students, along with Leonard J. Moore II and Reid Suttles who advanced to the final round. She was selected after several rounds of interviews and feedback on her work.

A fourth student, Pedro Urquia, might also be headed to the national festival. Pedro was selected as the region’s finalist for the Institute of Theatre Journalism and Advocacy award. Over the course of the week, he wrote several articles and reviews of the productions he saw at the festival. A panel will review the work of the eight regional finalists and select four to win the all-expenses paid trip to DC.

Several other students won awards in the Design and Technology Management categories. Caroline Frias, Jade Mesa, Leonardo Urbina, and Shannon Veguilla were all recognized for their excellence in design.

FIU Theatre also presented their production of Ubu Rex during the festival. It was one of six invited productions from around the region. Before attending the festival, students met several times for rehearsals and to practice loading in and loading out the set. All of that preparation paid off with a successful performance that received a standing ovation.

In partnership with the Kennedy Center, KCACTF strives to promote the work of theatre students throughout the country. KCACTF Region IV consists of colleges and universities from Alabama, Georgia, Florida, Kentucky, Mississippi, North Carolina, South Carolina, Tennessee, and Southern Virginia.