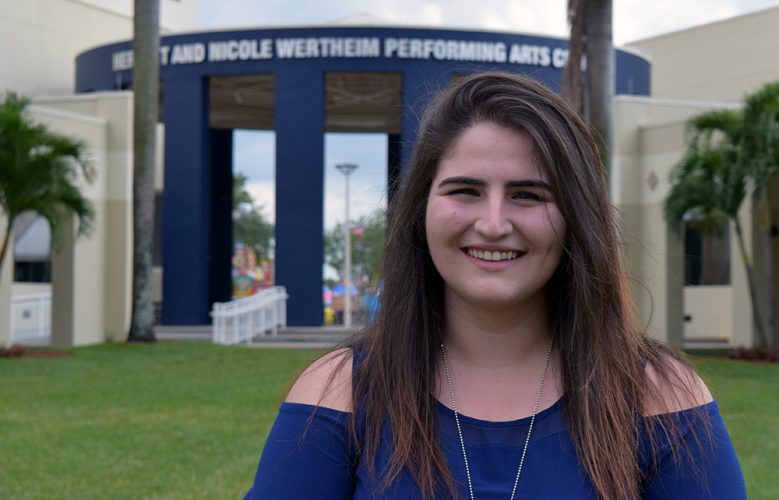 Melissa Lopez is the recipient of a prestigious National Student Directing Fellowship from the Stage Directors and Choreographers Society (SDC).

Lopez will be traveling to the National Kennedy Center American College Theatre Festival (KCACTF) in Washington, D.C., April 9-14, where she will join seven other student directors from around the United States.

“I am beyond excited,” she said. “It feels great to put a lot of time and effort into something and be rewarded for it.”

At the Kennedy Center, she will work with and get feedback from esteemed industry professionals, participate in workshops, and network with other top theatre students from around the country.

When Lopez arrives at the festival, she will receive a new scene to direct with actors she has never met before.

“To be honest, it’s a little nerve-wracking because I can’t prepare,” she says. “I have no idea what I’ll be doing. But I’m really excited to work with brand new people. This is going to test me a lot, but I think I’m ready for that challenge.”

The National Fellowship was awarded at a regional KCACTF in Georgia this past February. She was one of eight students who were applying for the fellowship at the regional level.

Participants were required to select a 10 minute scene, cast it with their classmates, and rehearse the scene back home. They also had to prepare a director’s book that included their analysis of the scene, rehearsal notes and blocking.

At the regional festival, they presented their scenes. After a series of feedback and interviews, four finalists were selected to further work on their scene based on the feedback and then present it one last time for the respondents.

“I learned a lot from that entire experience,” she says. “I was getting feedback from directors who have been doing this forever. They were seeing things that I never considered and I had a chance to then go back into rehearsal, play with these new ideas, and take the scene even deeper.”

If you had told Lopez just last year that she’d be traveling to Washington, D.C., with a directing fellowship she would’ve laughed. She enrolled in the theatre department as an actor, a dream she had nurtured since Career Day at her elementary school. But in her senior year at FIU, her career ambition took a sharp turn.

Professor Michael Yawney taught Melissa in his directing class. He was so impressed by her ability that he invited her to be his assistant director on last year’s production of Ubu Rex.

“Her work in class and the conversations we had about directing convinced me that this was something she could do,” said Yawney. “Melissa is really good at identifying how the visual and the sound and the character and the story work together.”

Lopez dove into the opportunity and quickly started contributing ideas.

“I don’t think assistant is the right word to describe her role on the show,” says Yawney. “She was truly a collaborator. She argued with me when my thinking was fuzzy. She encouraged me to go further when I was afraid I was going too far. She found solutions for impossible staging problems. I would use the word phenomenal if it didn’t sound like an exaggeration.”

One of Lopez’s biggest contributions was a scene where a Russian Czar makes a dramatic entrance. In rehearsal, she had the idea to have the Czar tie one of the set’s long curtains around her neck and then bring it down with a flourish to become her cape. It was a moment that always got a big reaction from the audience.

“Sitting there on opening night and hearing the audience react to a moment I had suggested and worked on was surreal,” she says. “In that moment I knew, I really like this and I want to keep doing it.”

Lopez wasn’t the only FIU Theatre student to make it to the final round of the regional festival. She was joined by Leonard J. Moore II and Reid Suttles, giving FIU Theatre three of the four regional finalists.

“We don’t have a directing track, but all of our students are required to take a directing class,” says Yawney. “They’re heavily involved in our productions and there are certain values about theatre and direction that I think are transmitted that way. Even though they’re not trained primarily as directors, I think they come out of the program with a sense of what direction should be.”

Lopez graduates in April and then will be pursuing directing opportunities through internships and fellowships around the country.

“This department gives you so many opportunities to try everything in the theatre,” she said. “I’m so glad I’ve taken advantage of them.”