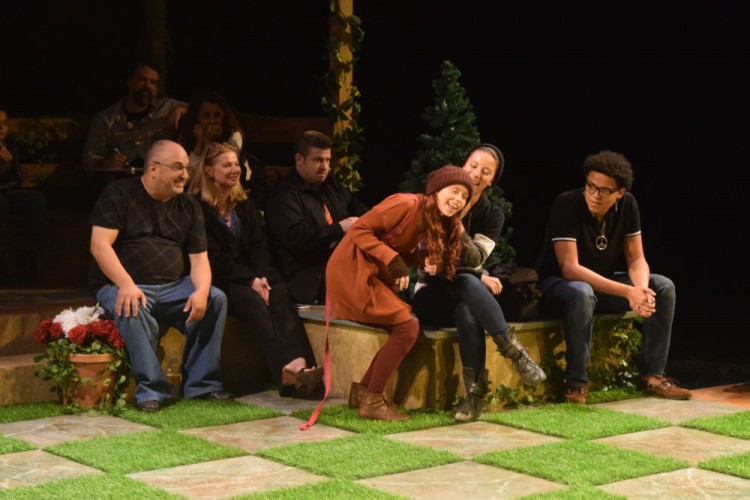 The production opens with Proteus (Anderson Freitas) and Valentine (David Forest Neale) taking leave of another. Valentine sets off for Milan, while the love-struck Proteus refuses to leave his Julia (Juanita Dilia Olivio) behind in Verona. While in Milan, Valentine falls in love with Silvia (Maria Laura Manino), the daughter of the Duke. However, when Proteus travels to Milan to join his friend, he too, falls in love with Silvia and seeks to undermine his friend by denouncing him to the Duke, and essentially testing their friendship by ‘breaking the guy code.’

According to Director Wayne E. Robinson, Jr. “many people still think of Shakespeare’s plays as high-brow literature beyond the comprehension of the average audience member. I think the playwright would be amused by the level of reverence given his work.  William Shakespeare produced what he believed would sell tickets.  As a shareholder in his theatre company, this was his priority.  What sold tickets then, is what sells tickets now: sex, violence and dumb jokes. Elizabethan audiences loved his stuff like we love The Kardashians and Game of Thrones.”

Cindy Garcia, digital media student at FIU, agrees. “It was my first time at a FIU Theatre performance. I was surprised at how professional the play was and how well the students did. I didn’t expect the play to be so funny!” 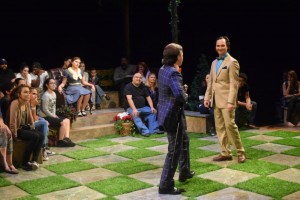 The award-winning faculty design team of faculty and students purposefully built a courtyard stage designed to remove the imaginary ‘fourth wall,’ essentially creating a unique and interactive experience for theatre goers. Here, you’ll find that cast members interact with, talk to, and walk among the audience throughout the performance. And don’t be surprised if the dog (Casey Hughes) beckons to be pet when she sits beside you on the bench.

In the end, you may not think of this production as high-brow literature, but it is highly entertaining and well-done.