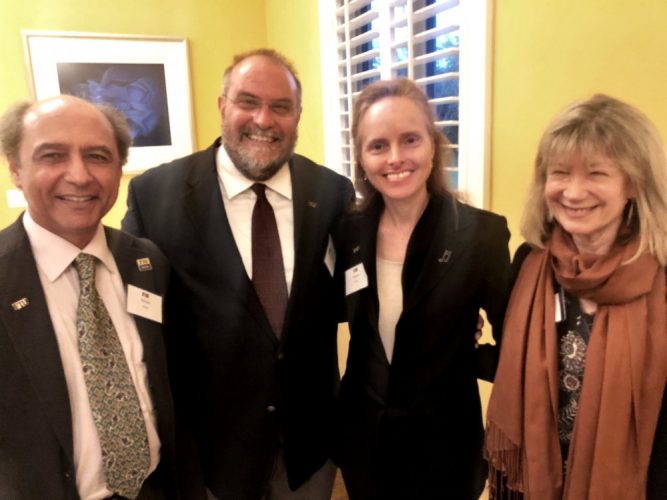 Earning a promotion is a highly recognized accomplishment in a faculty member’s career. Every year, the President & Provost invite faculty who earned a promotion to a reception at Reagan House to be recognized and celebrated.

Below is a complete list of 2019’s NTT faculty who earned a promotion:

Marcia Littley, violinist and founding member of the Amernet String Quartet, received her Bachelor of Music Degree from the Juilliard School as a student of Naoko Tanaka and Dorothy DeLay. As a member of the Amernet String Quartet, she was the winner of the First Prize in the Fifth Banff International String Quartet Competition; First Prize in the 1992 Tokyo International Music Competition, with the Special Asahi Award; Grand Prize winner of the Fischoff National Chamber Music Competition; and First Prize winner of the Yellow Springs National Chamber Music Competition. She holds the Artist Diploma from the University of Cincinnati College-Conservatory of Music. Ms. Littley’s other teachers have included James Ceasar, Jerrie Lucktenberg and Sally O’Reilly. She has appeared as soloist with orchestras in the United States and in Mexico, and has participated in music festivals including Aspen, Ravinia, Interlochen, Tanglewood, and the Isaac Stern Chamber Music Workshop at Carnegie Hall.

Dr. Özgen joined the faculty of Florida International University in the fall of 2013 as director of guitar studies and the FIU Miami Guitar Orchestra. He has performed and taught master classes throughout the United States, Spain, and Turkey and was the director of guitar studies at the University of California, Santa Cruz from 1998-2013. In addition to being a prizewinner in both the International Portland Guitar Competition and the National Guitar Competition of Turkey, he has performed as featured soloist in many festivals, including the International Paco Peña Guitar Festival in Cordoba, Spain, Yale Guitar Extravaganza, Sierra Nevada Guitar Festival, Santa Cruz Baroque Festival, Healdsburg Guitar Festival, Istanbul CRR Concert Series, April in Santa Cruz: Contemporary Music Festival, Cabrillo College Distinguished Artists Series, Ankara METU Art Festival, Kars Art Festival, Konya Mevlana (Rumi) Cultural Center Concert Series, UCSC Arts & Lectures Series, and Hidden Valley Masters Festival among others. He was also the founder, director and conductor of the Santa Cruz Guitar Orchestra between 2010-2013. Currently, he is founder and artistic director of the Miami International GuitART Festival.

Chris Goslin received his Master’s Degree from New York University and has worked as a Technical Director, Designer, Instructor, Producer, and Stage Manager over the course of the last 20 years. He is currently the Technical Director for Florida International University’s Department of Theatre. A few of his previous credits include Technical Director for California State University’s Summer Arts Program, Miami-Dade College, and for the Charlottesville Opera. He has held previous positions such as the Prop Master at the Pennsylvania Shakespeare Festival, Stage Manager at the NYC Fringe Festival, and served as the Managing Director for First Foot Theatre Productions, a not-for-profit theatre company in New York City that developed new works through workshops and performances. He is proud to have been a part of over 120 theatrical productions at the professional, university, and secondary levels.