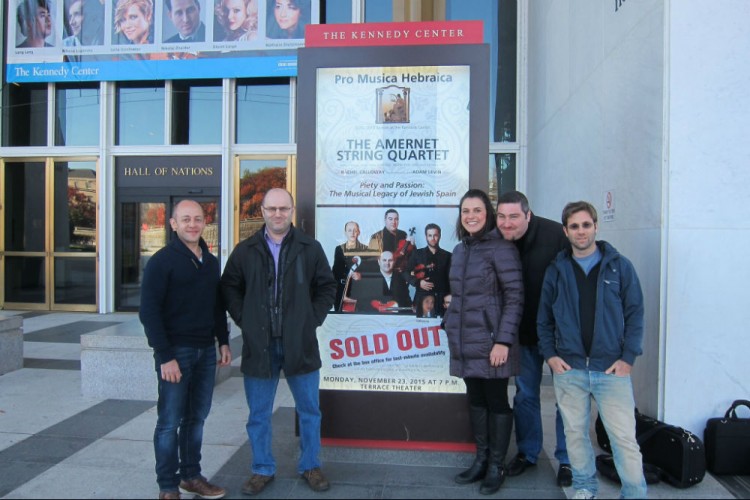 The Amernet String Quartet, has garnered worldwide praise and recognition as one of today’s exceptional string quartets. Ensemble-in-Residence at Florida International University’s School of Music since 2004, the group was formed in 1991, while its founding members were students at The Juilliard School. Amernet rose to international attention after their first season, winning the Gold Medal at the Tokyo International Music Competition in 1992. In 1995, the group took First Prize at the Banff International String Quartet Competition.

The Amernet’s performance schedule has taken the quartet across the Americas and to Asia, Europe, and the Middle East.  They have collaborated with many of today’s most prominent artists and ensembles including the Tokyo and Ying quartets as well as Shmuel Ashkenasi, Robert deMaine, Roberto Diaz, Gary Hoffman, Ida Kavafian, Anthony McGill, Sherrill Milnes and Michael Tree.

The Amernet has commissioned works from many of today’s leading composers, including Anthony Brandt, John Corigliano, and Toshi Ichiyanagi. The group’s recordings include works by John Harbison, Morton Subotnick, and Stephen Dankner.

The Amernet also actively advocates for neglected works of the past and aims to enliven the concert experience through its innovative programming, including their latest performance at the John F. Kennedy Center for the Performing Arts on Monday, November 23rd, 2015. They were joined by mezzo-soprano Rachel Calloway and guitarist Adam Levin in a sold out performance of the Sephardic and Spanish Jewish tradition on the Pro Music Hebraica Series.

The Washington Post hailed the performance as “an evocative concert of Jewish classical music…. transporting listeners to medieval Spain.”

The concert featured explore lesser known concert repertoire of the Sephardic tradition, including works by Mario Castelnuovo-Tedesco (1895–1968), the Italian Jewish composer whose family fled Spain in 1492, including the famous Guitar Quintet, his Second String Quartet, and songs from his Divan of Moses Ibn-Ezra Suite. The legacy of Sephardic song was highlighted in the world premiere of acclaimed composer Ljova’s (b. 1978) reenvisioning of the classic Ladino art songs of Alberto Hemsi (1898–1975) for voice and string quartet and Joaquín Rodrigo’s (1901–1999) Cuatro canciones sefardíes, paying homage both to his native Spain and his wife’s Sephardic heritage, in a new voice and guitar arrangement — together with the lively Secuencia Sefardita for solo guitar by contemporary Spanish composer Carlos Cruz de Castro (b. 1941).

The Amernet is now leading the inaugural year of the FIU Jewish music series this season – a five-part concert series entitled “Journey Through Sound: Exploring Jewish Life Through Music.” Presented in partnership by both the FIU School of Music and the Jewish Museum of Florida-FIU (JMOF-FIU), the collaboration features relevant exhibitions and a varied program of music from distinguished guest artists, members of the Florida Grand Opera (FGO), FIU alumni, and the Amernet String Quartet.

According to cellist Jason Calloway, “The FIU Jewish music series forms an integral bond with our community in bringing to audiences, often for the first time, the vital music of the Jewish diaspora in all its variety and encourages the dissemination of much that has till now been forgotten or neglected.”

The series began on Thursday, November 12, 2015 with a powerful evening, “In Commemoration of Kristallnacht,” the Night of Broken Glass, when a massive Nazi-sponsored attack on Jews occurred on November 9-10, 1938, that resulted in death and wholescale destruction, leaving shattered glass in the streets. Members of the Amernet Quartet explored works for string trio by Jewish composers including Hans Gal, Hans Krasa, Gideon Klein, and Egon Wellesz. This program ran in conjunction with the JMOF-FIU exhibition, Mark Podwal: All This Has Come Upon Us… featuring Podwal’s depictions of historical threats of antisemitism, combined with verses from the Book of Psalms.

The second concert in the series, “Klassically Klezmer” on Wednesday, December 9, 2015, will be a festive evening of klezmer and klezmer-inspired music, sponsored by Norman and Sylvia Levine and Family. Principal Clarinet Emeritus of the Cleveland Orchestra, Franklin Cohen and the Amernet Quartet will perform the landmark work The Dreams and Prayers of Isaac the Blind by Argentine composer Osvaldo Golijov; the Hebrew Sketches of Aleksandr Krein; and works from the repertoire of clarinetist Simeon Bellison, later principal of the New York Philharmonic, from his days leading the Zimro Ensemble in Moscow.

For the third concert, South Florida audiences will be able to hear the program that took place at The Kennedy Center on Tuesday, January 12, 2016. “Musica Sefarad” is inspired by JMOF-FIU’s exhibition Discovery and Recovery: Preserving Iraqi Jewish Heritage with documents and artifacts spanning 450 years from the now-extinct Jewish community of Iraq.

The series continues on Tuesday, February 23, 2016 with a concert devoted to the chamber music of Miecyslaw Weinberg, in collaboration with Florida Grand Opera, as a prelude to their Florida premiere production of the Weinberg’s opera, The Passenger. “Weinberg, Forgotten Genius,” will include works adapted by Jason Calloway from operatic excerpts and the composer’s most important work of chamber music, the piano quintet, with Dean of the Dorothy F. Schmidt College of Arts and Letters at FAU Heather Coltman.

The final concert of the season, “Music of the Shoah,” will take place on Wednesday, March 9, program of the vast body of works for quartet by composers from across Europe who perished in the Holocaust. Among these is music by David Grunfeld, a leading singer of the Yiddish theater; Pavel Haas, one of the guiding musical voices of the so-called Nazi model camp at Terezin; Erwin Schulhoff, a diverse musical polyglot of the first half of the 20th-century and student of Debussy; Leo Smit, a vibrant Dutch composer who was working on his sadly unfinished string quartet before being deported to Sobibor; and Viktor Ullmann, composer of the satirical opera The Emperor of Atlantis.

The Amernet is currently forging ahead with the release of a new CD entitled Dissenting Voices on New Focus Recordings featuring rarely-heard works by Sofia Gubaidulina, Shostakovich, and Mieczysław Weinberg, one of the most important recent re-discoveries and considered by many the third of the great Soviet composers, alongside Prokofiev and Shostakovich.

All concerts on the “Journey Through Sound: Exploring Jewish Life Through Music” series will take place at 7:00pm and will be held at Jewish Museum of Florida-FIU, 301 Washington Ave., Miami Beach, FL 33139; Admission, unless otherwise noted, is $10 JMOF-FIU Members; $18 Non-Members; FREE for FIU Students (with valid ID).