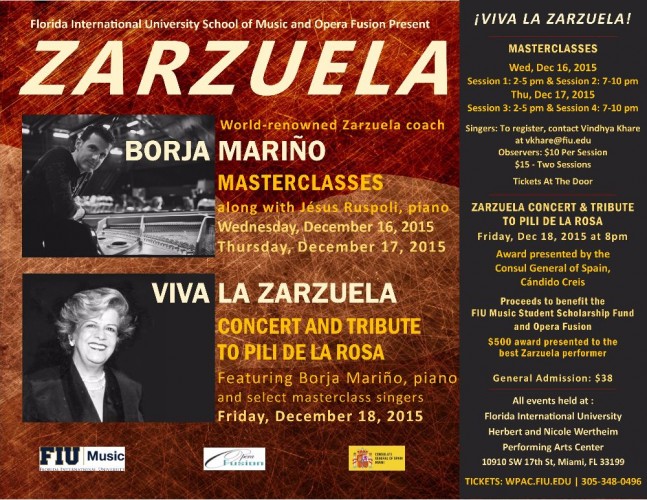 “Viva La Zarzuela,” masterclasses for singers, followed by a concert featuring world-class zarzuela coach Borja Mariño, are planned for Dec. 16, 17 and 18 at the Herbert and Nicole Wertheim Performing Arts Center at FIU’s Modesto A. Maidique Campus.

The event will be a collaboration between West Palm Beach-based Opera Fusion, a fledgling artist-driven company that plans performances by local artists at venues around South Florida, and the Florida International University School of Music.

Mariño will hear and coach up to 30 singers performing zarzuela repertoire during the master classes on Dec. 16 and 17, and will accompany the finalists who will perform in a zarzuela concert on Dec. 18.  The concert will be a tribute to Pili de la Rosa, a founder of Sociedad Pro-Arte Grateli in Miami.

Mariño is coming to South Florida at the request of Opera Fusion president Dr. Xavier Garcia, a baritone and West Palm Beach veterinarian who has studied zarzuela under him in Madrid. “Mariño is one of the best in the world in this repertoire,” Garcia said. “He’s worked with the top performers in the world.”

At the Dec. 18 zarzuela concert at FIU, de la Rosa of Miami will be honored as a co-founder, in 1971, and the current president of the nonprofit Sociedad Pro-Arte Grateli in Miami.  “She is being honored for her many years of work to keep the art form of zarzuela alive in the United States,” Garcia said.

Another dignitary at the Dec. 18 concert will be Cándido Creis Estrada, the consul general of Spain, who is based in Miami. He will present de la Rosa, who is now 89, with her award.

Spanish-born Mariño is a vocal coach, composer, musicologist and pianist who has accompanied luminaries of the international opera scene.  He is currently on the faculty of the Escuela Superior de Canto in Madrid.  For the master class singers and FIU staff, “what a privilege to work with someone who’s of that caliber,” said Vindhya Khare, FIU area coordinator for vocal studies.

During the master classes on Dec. 16 and 17, pianist Jesus Garcia Ruspoli will accompany the zarzuela singers. Ruspoli is well known to Miami audiences with his over thirty years of performing in the area.

Zarzuela, which has existed since the 17th century, spread from Spain to many of its colonies, and many Hispanic countries – notably Cuba – developed their own traditions. It is an accessible, colorful, fun and expressive type of music, said Khare, describing it as “operetta meets the golden age of Broadway.  There’s a lot of drama, love triangles.”

Khare and Robert Dundas, Director of the FIU Music Department, are working with Opera Fusion to coordinate the three days of zarzuela events.  Profits will be split between the opera company and scholarships for FIU music students, said Birgit Fioravante, executive director of Opera Fusion.  Singers who want to participate in the master classes with Mariño are filling out applications that go to Khare, she said.

The night’s honoree, Cuban-born de la Rosa, holds a master’s degree in dramatic arts from the University of Havana.  She taught acting and dance, served as English-to-Spanish dubbing director for many Hollywood films at Sound Lab in Miami, hosted and produced television and radio shows, co-founded nonprofits that brought Cuban and Latin folklore to the stage, and managed both the artistic and administrative aspects of Sociedad Pro-Arte Grateli, shepherding it into a first-class theatrical organization.

With their baby daughter, De La Rosa and her husband, Demetrio Menéndez, came to Florida as exiles from Cuba in 1960, and founded Sociedad Pro-Arte Grateli in 1971 along with singer Marta Perez, known as La Diva Cubana, and Miguel de Grandy II, an actor now living in Spain.  Perez died in 2009, and Menéndez died recently this year.

Each of the four founders put in $100, said actress Ana Margo, de la Rosa’s daughter, and Grateli grew into an organization that at one point held performances every month at the Miami Dade County Auditorium.  “They really had, at the beginning of their exile here, the cream of the crop” of actors and conductors from Cuba and Spain, she said. Today, the nonprofit still mounts three to four shows each year, and her mother “really is now the one pillar holding up the fort.”

Grateli is dedicated to promoting Hispanic American culture through the theatrical arts.  Its shows include presentations of Hispanic and American origin including zarzuelas, operettas, musical comedies, musical festivals and dramatic presentations.

Tickets to the performance are available online at wpac.fiu.edu, by calling 305-348-0496, or by emailing wpac@fiu.edu.

PrevPrevious StoryFIU’s Amernet String Quartet, Advocate for Neglected Works, Performs at The Kennedy Center
Next StoryFIU School of Music Student Recognized as a Worlds Ahead GraduateNext