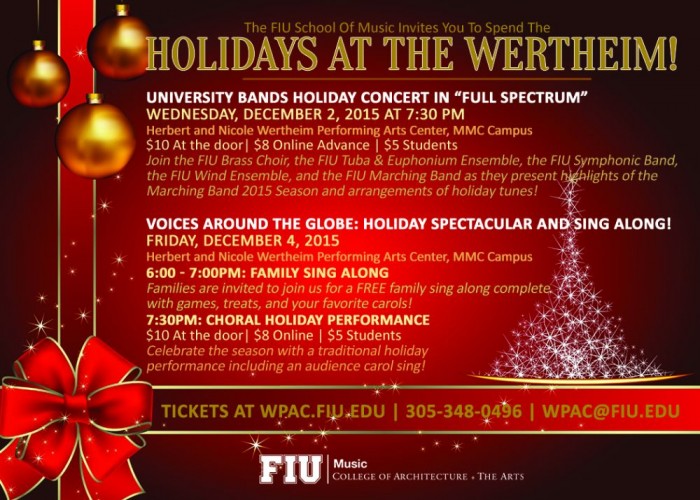 Join the FIU School of Music for two holiday concerts in celebration of the season.

The annual University Bands holiday concert will live up to its name as a “Full Spectrum” event, incorporating the sounds of wind instruments from five different ensembles including the FIU Brass Choir, the FIU Tuba & Euphonium Ensemble, the FIU Symphonic Band, the FIU Wind Ensemble, and the FIU Marching Band. Band Director Barry Bernhardt will lead this popular annual event on Wednesday, December 2, 2015 at 7:30pm.  Audiences will be treated to highlights of the Marching Band’s 2015 Season and arrangements of holiday tunes!

On Friday, December 4, 2015, Choral Director Kathryn K. Longo will lead an evening of family-filled festivities with “Voices Around The Globe: Holiday Spectacular and Sing Along” beginning at 6pm. Families are invited to join FIU singers for a free family sing along complete with games, treats, and your favorite carols until 7:00pm. At 7:30pm, a special Christmas concert featuring members of the FIU Choirs will perform beloved Christmas carols and traditional favorites, along with an audience sing along.

VOICES AROUND THE GLOBE: HOLIDAY SPECTACULAR AND SING ALONG!

Tickets are available through the Herbert and Nicole Wertheim Performing Arts Center Box Office at wpac.fiu.edu, 305-348-0496, wpac@fiu.edu, or at the door. General Admission to performances is $10 and discounted rates are given to students for only $5.