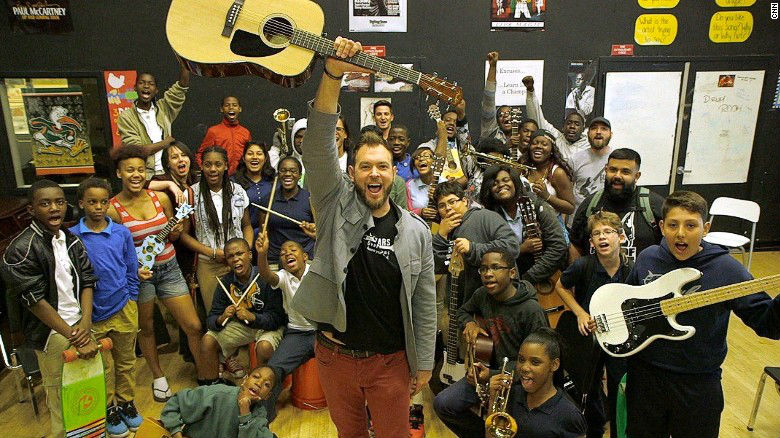 Despite the glitz and glamour Miami is known for, the odds for some children growing up there are bleak.

Almost one of every three Miami-Dade County residents living in poverty is under 18, according to the Department of Regulatory and Economic Resources. Many schools face high dropout rates, after-school programs are being eliminated, and students are failing. Those at-risk children are ones that Chad Bernstein is trying to help through his nonprofit, Guitars Over Guns.

“Music is the most important tool we have in reaching these kids,” said Bernstein, 30, a professional musician. His program operates in two of Miami’s poorest communities, North Miami and Allapattah. It pairs middle-school students with professional musicians, providing free instrument instruction and mentorship. Since 2008, Bernstein’s organization has worked with more than 225 students in Miami-Dade County. He says his group has seen more than a 90% increase in academic performance and school attendance of students in the program. Bernstein has been hooked on playing gigs since he was 16. He’s gone on to play and record with such musical greats as Shakira, Pharrell, Jennifer Hudson, and Pitbull.

I sat down with Bernstein to learn more about the motivation behind his work. Below is an edited version of our conversation.

Marissa Calhoun: You’re a pretty cool guy — some might be surprised to hear that you were once bullied. What did you experience and how did you overcome it?

Chad Bernstein: When I was a kid, I had ears that stuck out the side of my head and really big green glasses. And I was tall and lanky and definitely looked a little different than other kids. I think part of the thing that really stuck with me was this feeling of wanting to belong to something, because I just didn’t feel like I fit in with the other kids.

Calhoun: What can students expect when they join your program?

Bernstein: As a new GOGO student you’ll get to try out all the instruments. You’ll choose an instrument to learn. You’ll be paired with a mentor. And then you’ll go throughout that year learning how to play the instrument and music fundamentals and songwriting. And by the end of the year, you’ll be performing on stage, recording in a studio and will have a very close relationship with that mentor.

Our mentors are amazing musicians that are active in the community playing and performing. And some of these mentors are actually from the neighborhoods and the schools that these kids are at currently. We’re not policemen. We’re not teachers. We’re not parents. We’re in a unique position to really talk to these kids about the issues that matter most to them.

Calhoun: Why do you focus on middle schoolers?

Bernstein: It’s the time of their life to reach them not only musically, but also as young individuals that are starting to form opinions about who they are and what their world is going to look like.

As professional musicians, most of us know what kind of power music has in terms of dealing with the things that are going on in your life.  And the reasons that we target the neighborhoods that we have the program in are because these kids are facing the most challenges with being successful in and out of school. A lot of times, these kids only see to the end of their block and back. We like to bring them to studios and also to other places in Miami because we want them to experience something outside of their own neighborhood.

We also provide them with opportunities to get tutoring and have social services, making sure that they’re really successful in and outside of school.

By the end of the year students in the program will be performing on stage and recording in a studio.

Calhoun: I’ve heard you play — you’re pretty mean on the trombone. How has that passion translated into your work with these kids?

Bernstein: I’ve built my life on how important the feeling I get from playing music is. And I thought that that was the end-all, be-all feeling, that being on stage and performing was the thing for me. Then I saw a kid have that experience through our program, and it changed everything.

There’s an amazing sense of pride when I see a kid experience that feeling on stage, where they’ve connected with an audience or they get a round of applause because they’ve worked really hard and had a great performance. It’s an incredible feeling. I was really fortunate to have the opportunities that I did to learn music. And part of me feels very responsible to provide those opportunities for other people, because there were people along the way in my path and my musical journey that helped me.

Check out the “Guitars Over Guns” website at www.guitarsoverguns.org.

To read the original article from CNN or view more photos, click here.

*Photo courtesy of ‘Guitars Over Guns’