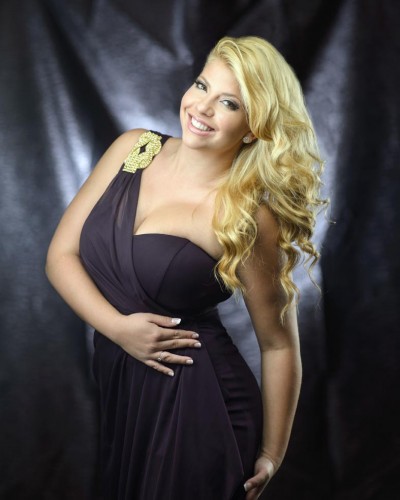 The winner of the 19th Annual FIU Concerto Competition, Laura Martinez Leon, will showcase her talent in the Orchestral Masterworks Series featuring the FIU Symphony Orchestra and the Miami Music Project.

Laura Martinez Leon is a natural Cuban soprano. She emigrated from Cuba to the United States in 2005 and is currently finishing her Master’s Degree in Voice Performance under the tutelage of Robert B. Dundas.

“The experience of competing was thrilling! I had to use every ounce of technical knowledge and experience to get through all three pieces,” said Ms. Martinez Leon. “I am very happy with the results and couldn’t be more grateful that I was chosen to represent the FIU School of Music, considering that I faced such a strong competition.”

Miss Leon auditioned with the Queen of the Night’s second aria “Der Hölle Rache“ from Mozart’s Die Zauberflöte (The Magic Flute) and “Les oiseaux dans la charmille” (Doll’s Aria) from Les Contes d’Hoffmann by Offenbach, as well as “I am the wife of Mao Tse-Tung” from Nixon in China by Adams. “These pieces are different in style difficult in their own right and are rarely programmed together. It’s a bit like practicing vocal gymnastics!” Ms. Leon admits.

She has established herself as the official National Anthem Performer for the Immigration Services of Miami-Dade County, where she has had the privilege of singing for the Major of Miami, as well as other government officials. In 2014, she performed the role of Königin der Nacht in the 2014 Miami Summer Festival production of Die Zauberflöte directed by Michael Rossi, Washington’s National Opera orchestra director. This spring, she  performed the role of Laoula in FIU Opera Theater’s L’etoile by Chabrier and made her debut with Opera Fusion’s The Sopranos.

In addition to her auditioned pieces, Miss Leon will be performing “Me llama la primorosa” from El Barbero de Sevilla during the April 17th Orchestral Masterworks performance with the FIU Symphony Orchestra at FIU’s Herbert and Nicole Wertheim Performing Arts Center Concert Hall. The concert will also feature the Miami Music Project Children’s Orchestra, to be conducted by Abiram Brizuela, as well as a special appearance by guest conductor Neil Varon, who will conduct Mendelssohn’s “The Hebrides Overture” (Fingal’s Cave), Op. 26.