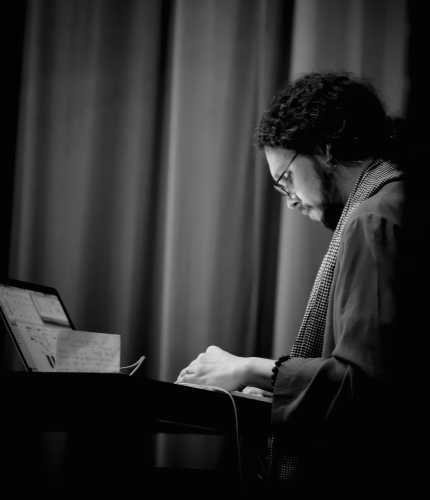 Dr. Jacob Sudol, Assistant Professor and Coordinator of the Music Technology Program at FIU School of Music, has been awarded a Fulbright Scholar grant to lecture at National Chiao Tung University’s Institute of Music (IMU) and Sound and Music Innovative Technologies (SMIT) in Taiwan during the 2015-2016 academic year.

Dr. Sudol will be teaching composition and music technology courses to encourage and display interdisciplinary work between the two fields, as well as collaborating with local Taiwanese musicians on creating and performing new compositions that incorporate technology. He will give lectures and performances throughout Taiwan and will assist with producing multiple concerts as part of two international festivals. He also has plans to travel to other countries in East and Southeast Asia to lecture on composition and music technology and present his music as well, as learn more about new music in Asia.

According to Dr. Sudol, “I’m deeply honored to have been selected to a Visiting Professor at the prestigious National Chiao Tung University in Hsinchu, Taiwan for the 2015 -16 Academic Year. I’m really looking forward to the opportunities the Fulbright will provide me to learn more about Taiwanese and Chinese culture as well as share ideas and new technologies from the USA and the West.  It’s also my real hope that the Fulbright will also provide many more opportunities to develop confluences of musical cultures between the East and West.”

Sudol is one of approximately 1,100 U.S. faculty and professionals who will travel abroad through the Fulbright U.S. Scholar Program in 2015-2016. The Fulbright Program is the flagship international educational exchange program sponsored by the U.S. government and is designed to increase mutual understanding between the people of the United States and the people of other countries. The primary source of funding for the Fulbright Program is an annual appropriation made by the U.S. Congress to the U.S. Department of State, Bureau of Educational and Cultural Affairs. Participating governments and host institutions, corporations, and foundations in foreign countries and in the United States also provide support. The program operates in over 155 countries worldwide. Since its establishment in 1946 under legislation introduced by the late U.S. Senator J. William Fulbright of Arkansas, the Fulbright Program has given over 318,000 students, scholars, teachers, artists, scientists, and other professionals the opportunity to study, teach and conduct research, exchange ideas, and contribute to finding solutions to international concerns.

He will be honored as a FIU Top Scholars in the category of Award Winning Publications on Friday, April 24rd at Ronald W. Reagan Presidential House, where President Mark B. Rosenberg and Provost/Executive Vice President Kenneth G. Furton will be in attendance.

PrevPrevious StoryFIU School of Music to Welcome Leading Cuban Musicologist Dr. Miriam Escudero
Next StorySo You Think You Can Camp?Next