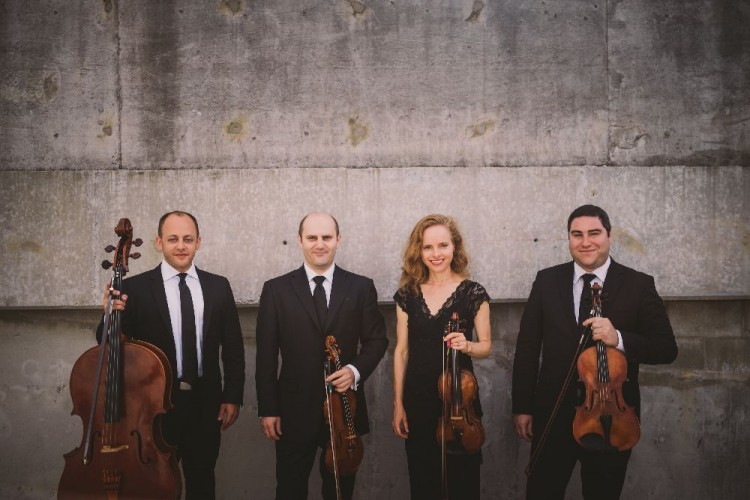 The Amernet String Quartet, FIU’s ensemble-in-residence, has been invited to perform at SOLUNA International Music & Arts Festival in Dallas.

2015 marks the inaugural year of SOLUNA International Music & Arts Festival in Dallas. This year’s theme is “Destination (America)” in honor of the artists who came to create in freedom, and to those inspired by a uniquely optimistic view that is central to the American experience. Anchored by Dallas Symphony Orchestra (DSO) performances led by Music Director Jaap van Zweden, the three-week festival will showcase internationally-acclaimed guest soloists, artists, and ensembles in visual and performing arts along with the leading companies and ensembles in the Dallas Arts District and beyond. (Source: Dallas Symphony Orchestra)

The Amernet String Quartet, with DSO musicians, will perform works by composers who either immigrated to the United States or spent a significant portion of their lives in the U.S. At the Dallas City Performance Hall, the quartet will perform masterworks by Rachmaninoff, Korngold, and Enescu. At the Dallas Contemporary, they will perform Britten’s Phantasy Quartet with principal Oboe Erin Hannigan. Lastly, at the Cliff Temple Baptist Church, the Quartet will perform Ginastera’s String Quartet No. 3 (which premiered in Dallas in 1974) and Schoenberg’s groundbreaking Transfigured Night.

“It’s a real honor and pleasure for us to have been invited to appear in the Festival . . . because of the association with the Dallas Symphony,” said the Amernet Quartet.

Praised for their “intelligence” and “immensely satisfying” playing by the New York Times, the Amernet String Quartet has garnered recognition as one of today’s exceptional string quartets. Their sound has been called “complex” but with an “old world flavor.” Strad Magazine described the Amernet as “a group of exceptional technical ability.” The Amernet’s performance schedule has taken the quartet across the Americas and to Asia, Europe, and the Middle East. They have collaborated with many of today’s most prominent artists and ensembles including the Tokyo and Ying quartets as well as Shmuel Ashkenasi, Robert deMaine, Roberto Diaz, Gary Hoffman, Ida Kavafian, Anthony McGill, Sherrill Milnes, and Michael Tree. For more information, visit amernetquartet.com.

The Amernet is proud to represent FIU at SOLUNA. “FIU is our home,” said cellist Jason Calloway. “While none of us is from here, we have been, like so many other residents of Miami, drawn here by the city’s opportunity, by its future, by its culture. At FIU, we have a wonderful home where we make music and teach our talented students, educating the next generation of string players, while, at the same time – especially at the Miami Beach Urban Studios in addition to the main campus – enjoying the opportunity to rub shoulders with artists and thinkers of other disciplines.”

Calloway said that FIU is “truly fertile cultural ground, in the same way that the city of Miami is.”

PrevPrevious StoryFIU Music Students Walk the Red Carpet at the 2015 Billboard Latin Music Awards
Next StoryCongratulations to Our Spring 2015 Graduates!Next