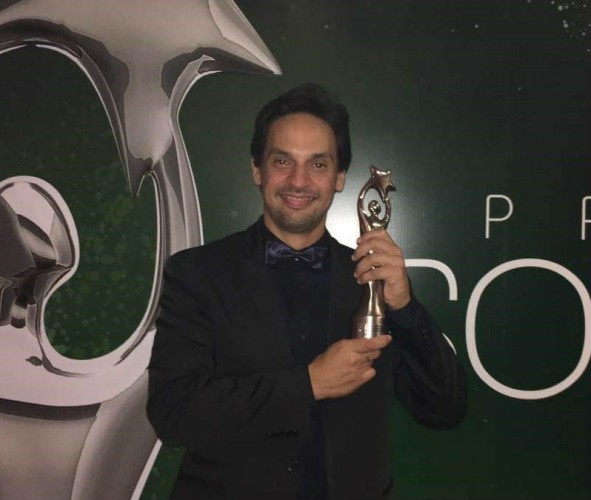 Less than a year after graduating, FIU School of Music alumnus and conductor/composer Darwin Aquino ’15 received the Successful Dominican Artist Abroad Award in the classical category at the Soberano Awards 2016 (Premios Soberano in Spanish) on May 31st, the biggest award show in the Dominican Republic held each year in the National Theater Eduardo Brito in Santo Domingo.

Since 1985, Premios Soberano has been honoring the achievements of its greatest artists in the fields of local music, TV, radio, theatre, classical arts, and movies. Many of its winners have achieved international recognition and have been awarded at the Latin Grammys, Latin Billboard and Billboard Awards, Latin American Music Awards, among others.

Darwin Aquino studied composition at the Conservatoire National du Strasbourg in France with Italian Maestro Ivan Fedele. Later he was appointed assistant conductor of the Florida International University Symphony Orchestra, under the baton of Maestro Grzegorz Nowak, where he graduated with a Master in Orchestral Conducting and was distinguished by unanimous vote of the faculty with the Graduate Performer Award. Aquino was selected to participate in many international conducting master classes with maestros such as Jose Serebrier, David Effron, Colin Metters, Ramon Tebar, Neil Varon, James Judd, Mark Gibson, Enrique Garcia Asensio and Eduardo Marturet.

“The teachers and students at the FIU School of Music are always in my heart. I feel that I never left.” Aquino said. “I have learned so much about music making and experienced some of the best artistic events of my life there. I’m deeply thankful for all the knowledge and appreciation that the School, Directors, my mentor and teacher Maestro Grzegorz Nowak, the FIU Symphony Orchestra, faculty, students, and staff gave me during the most amazing two years. I dedicate this award to my FIU family. The School opened the doors to a brilliant musical future. I’m so happy I decided to study there. Gracias del fondo de mi corazon!”

After graduating from FIU, Aquino began a promising career in the U.S., making his operatic professional debut in Winter Opera, St. Louis with Giuseppe Verdi’s “Il Trovatore” and was also selected as assistant conductor by both the Florida Grand Opera and the Palm Beach Symphony.

In 2015 he was selected among many international composers for the premiere of his orchestral piece “Espacio Ritual” by the Orchestre Philharmonique de Radio France, during the Festival “Presences” at La Maison de la Radio in Paris. The Latin American Collegium of Composers and the Caribbean Composers Forum selected him as their youngest member for his outstanding achievements in composition. Recently, he was invited to Havana, Cuba as one of the judges for the Composition Prize Casa de las Americas 2015.

With a vibrant career as a conductor he has been invited to lead the National Symphony Orchestra of Costa Rica, Alfredo de Saint Malo Festival Orchestra in Panama, FIU Symphony Orchestra and Opera Theater, Filarmónica Boca del Rio in Mexico, Sembrando Talentos Festival Orchestra in Uruguay, International Youth Orchestra in Virginia, among others. The Youth Orchestra of the Americas (YOA) chose Aquino as violinist, guest conductor and composer for many concert tours throughout the Americas and for special performances at Carnegie Hall. He has worked as conductor with soloists such as Rachel Barton Pine, Robert Davidovici, Maria Kanyova, Kemal Gekic, Jorge Pita Carreras, Shari Mason, Roland Baldini, among others. Aquino is the first conductor in the Dominican Republic to premiere Anton Bruckner’s symphonies.

As a composer, the Orchestre Philharmonique de Radio France in Paris premiered one of his pieces for orchestra “Espacio Ritual” during the “Presences” festival, a large international celebration for contemporary music, and the Orquesta Sinfonica Nacional del Salvador performed the work “YOAminicana” as part of the Latin American Union of Composers.

On June 28 and 29, 2016, he will join the Philharmonisches Staatsorchester Mainz in Germany to conduct “Fiesta Latina,” a two day event celebrating the symphonic music of Cuba, Mexico, Argentina, Dominican Republic, and Venezuela.