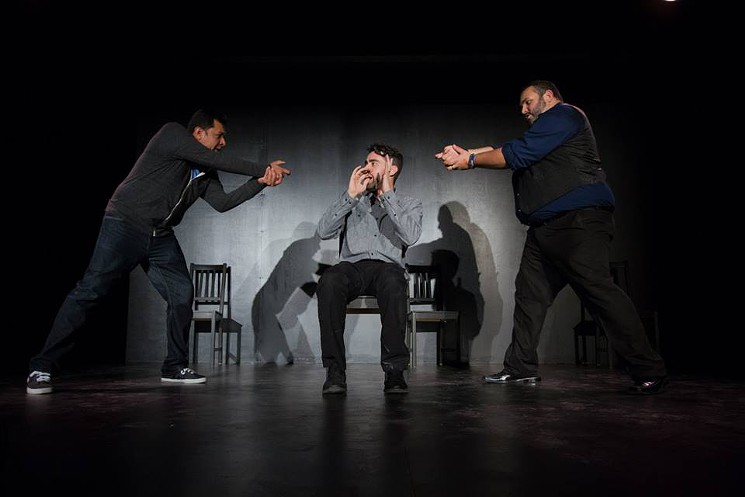 Picture yourself standing on a stage.  There’s an eager crowd anticipating your next move and it’s your turn to speak, but you haven’t a clue what you’re going to say or do next.  For most people, this is the beginning of a nightmare.  But for the improvisers at Villain Theatre, it is an experience they crave and thrive in.

Villain Theatre is a new improv theater company founded by FIU graduate Peter Mir (BA, Theatre) and Jeff Quintana in August 2015.  In less than a year, the company has become the premier place for comedy in South Florida – recently being named “Best New Theater” by the Miami New Times.  Every Thursday, Friday, and Saturday night, Villain packs in audiences at their unique space in Little Haiti’s MADE at the Citadel for an evening full of laughs.

Beyond comedy, improv creates a safe, playful environment that allows participants to enhance and develop lifelong skills, both personal and professional.  Some benefits of improv include increased confidence, heightened creativity, team building skills, the ability to think quickly, and more assertive decision making.

Jeff Quintana, the company’s Artistic Director, believes improv helps people learn to connect in everyday conversations.  “Most people are bad at conversation because they’re sitting there waiting for you to stop talking more than they’re listening to you.  That’s the major skill you develop in improv that works for everything.  Just becoming a better listener.”

The origins of Villain Theater can be traced back to 2003 when Peter and Jeff met at an audition for another improv comedy group, Impromedy.  The two became regular cast members and their friendship and chemistry blossomed.  Searching for a richer experience, Peter and Jeff explored improve and theater in Chicago and New York, learning from and working with some of the greats.  Soon they discovered that something was missing and so they decided to return home and create it themselves.

“We started realizing that Miami didn’t have what we wanted and so we went somewhere else,” said Peter Mir, “but when we went there, we realized that what we wanted wasn’t there either.  So we decided to come back to Miami, take what we learned in New York and Chicago, and build what we wanted here. Miami is fertile ground.”

Incorporating what they’ve learned in other cities, Peter and Jeff are bringing new life to the theater scene in South Florida with Chicago style improvisation, sketch, and devised comedy.  With the establishment of Villain, improv has become an accessible tool for actors and other creative people in Miami.

“We just aren’t seeing ourselves represented in those big markets,” added Jeff Quintana.  “People down here are starting to say, ‘I want to see what we do represented. Where is our voice?’  That’s why I came back down. This is a place where I can get that voice to come out.

FIU alumni have been a huge driving force for the success of the company.  The regular rotating cast features over 20 FIU alumni, with even more taking classes.  The company has given many of them access to a stage and training to continue their growth and development after graduation.

Saturday, July 16 is the perfect time to join your fellow FIU alumni for a special FIU Night at Villain.  Come see for yourself why the Miami New Times has named Villain Theater the “Best New Theater.”  An abundance of laughs is guaranteed.  Due to the “anything goes” nature of improv, we recommend attendance be kept to 18+