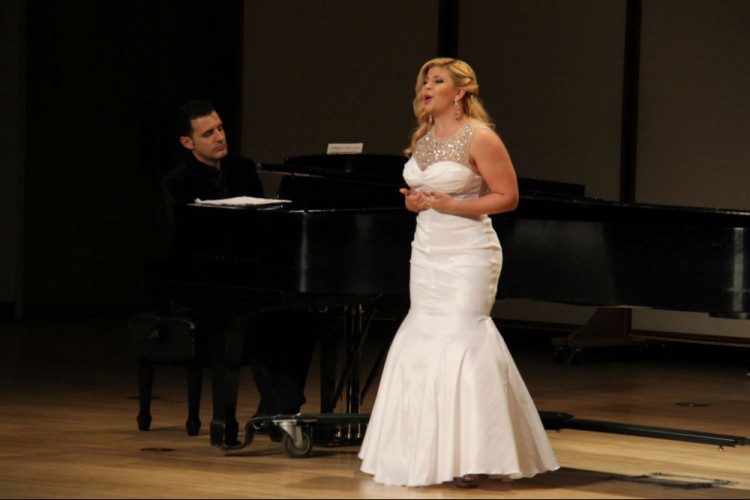 Soprano alumna, Laura Martinez León, is in Spain and will spend about three months in Europe to study with several voice teachers after her May 23rd performance at the Escuela Superior de Canto, Madrid’s Conservatory of Music.

Mariño subsequently invited Martinez León to Spain to perform in concert. He is a vocal coach, composer, musicologist and pianist who has accompanied luminaries of the international opera scene, and currently is on the faculty of the Escuela Superior de Canto.

At the concert, led by Mariño, Martinez León performed a set of “Hermit” songs by Samuel Barber, a Cuban artsong, and zarzuela selections including pieces by Ernesto Lecuona, Eduardo Sanchez de Fuentes, and Gonzalo Roig. A local tenor joined her for a set of Spanish zarzuela selections.

In addition to the concert she gave at the Escuela Superior de Canto, Martinez León was invited to study zarzuela with baritone David Menéndez in Asturias, Spain, and will study under other experts in Valencia and Madrid. After that, she will study at the Mozarteum in Salzburg, Austria, with renowned soprano Helen Donath, a frequent guest artist at the FIU School of Music.

Martinez León is a member of the Young Artist Program of the Florida Grand Opera, where this year she has covered Yvette in “The Passenger” and Norina in “Don Pasquale.” In 2015 she won the 19th Annual FIU Concerto Competition, and then showcased her talent in the Orchestral Masterworks Series featuring the FIU Symphony Orchestra and the Miami Music Project. She also performs regularly with Opera Fusion, and is the official National Anthem performer for the Immigration Services of Miami-Dade County.

Martinez León immigrated to the United States in 2005 after growing up in Cuba where she sang in a children’s opera choir in the Grand Theater Garcia Lorca in Havana; later, as a teen, she sang in the National Juvenile Choir, directed by Digna Guerra. As a young child, she briefly took piano lessons; this enabled her to read music, a critical skill that allowed her to be accepted into the choirs.

Today Martinez León is a coloratura soprano, an often-used name for a fast, bright voice that reaches stratospheric notes.

Martinez León created the role of the Cuban-Amercan diva Margarita Cerveza Tequila in Opera Fusion’s “Duelling Divas,” which was performed in 2015 at the Sunshine Cathedral in Fort Lauderdale and FAU’s University Theatre, and she will reprise the role for Opera Fusion in December. Her other performance roles in 2015 included Princess Laola from “L’Etoile” at FIU, and as soloist in the recent recording of “Stars & Distances” by Fredrick Kaufman, with members of the Florida Grand Opera.

To find out more about, visit LauraMartinezLeon.com.