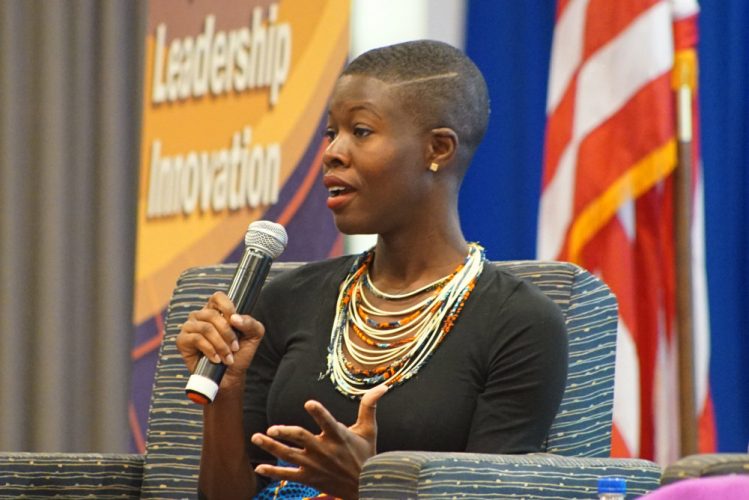 This one-day conference was keynoted in the morning by Festa, senior vice president of news partnerships for NBC Universal, and in the afternoon by Ellen Weiss, vice president & Washington, DC Bureau Chief of the E.W. Scripps Company.

Festa continued, “The demographics of the newsroom should look like the people in the communities we cover. Having diverse news organizations not only makes our stories richer and different, but rebuilds public trust when you represent the voices of all Americans.”

Ellen Weiss, afternoon keynoter, discussed the power of words used by communicators.  She said that those in the media business need to be aware of the words that they use to ensure accuracy and a lack of bias.

Lillian Lodge Kopenhaver, executive director of the Kopenhaver Center, said, “Since women make up more than half the population of the United States, it is important that communications in this country represent our population equitably, both in the information that is delivered and in those who deliver that information. Only in this way can we protect and defend our democratic society. The conference provided us with an opportunity to explore the reality of the role and status of women in communication and chart a pathway to help women realize their potential and become those visionaries and leaders of tomorrow.”

The day’s events brought together thought leaders, industry professionals and scholars from around the country to participate in active conversation about the topic of women moving ahead.

The Kopenhaver Center serves as a national thought-leadership center on women issues, which advances the collective commitment to mentor women across the communication industries.  Signature programming is accomplished through scholarly research, seminars and webinars, mentoring program, annual national symposium in Washington, DC, fellowships, and annual national conference which envisions the way for future generations of communicators, professionals, and scholars.   This is accomplished by actively supporting female communicators in a didactic mentoring philosophy, which is focused on creating an educational forum for developing a leadership brand, entrepreneurialism, and technological innovation.

The mission of the Kopenhaver Center is to empower both women professionals and academics in all the fields of communication in order to develop visionaries and leaders who can make a difference in their communities and in their professions.