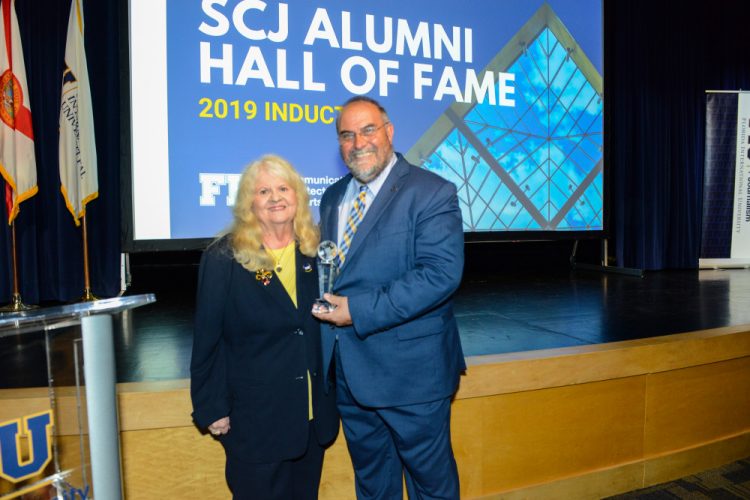 Lillian Lodge Kopenhaver Inducted Into The SCJ Hall of Fame

The class of SCJ Alumni Hall of Fame honorees included:

An uplifting event, the evening included kind words from those that nominated the inductees or know them well. One surprise for those in attendance was the video narrated by Lester Holt, in which he introduced Dianne Festa to relay just a few of her many accomplishments. In addition, each of the inductees shared messages that imparted sentiments of gratitude, and also encouraged and empowered future generations of communications practitioners.

“I can’t think of a better place to have studied for my master’s degree than FIU. It has opened a lot of opportunities. Now, I work hard to replicate many of the things that I learned here,” said Mariana Alvarado, advisor and professor in the Center for Education in Digital Journalism in Guadalajara. “My advice to students and colleagues is to never stop learning and working hard to follow your passion.”

In addition, Dr. Lillian Lodge Kopenhaver, FIU’s CARTA Dean Emeritus and Executive Director of the Kopenhaver Center for the Advancement of Women in Communication was awarded the 2019 SCJ Impact award. Dr. Moses Shumow, Associate Professor in Journalism + Media and Lynne Farber, Associate Professor in Advertising and Public Relations received the Distinguished Faculty Award for their work and dedication to students. Jacquelyn Hurtado and Jocelyn Hurtado, received the Outstanding Student Award for their exceptional work in the fields of communication, journalism, and media in the classroom.

The event took place at the FIU Biscayne Bay Campus and was kicked off with a VIP reception in the Ratcliffe Art + Design Incubator. Guests were encouraged to take tours of the SCJ Media Hub conducted by FIU students. The awards ceremony followed in the Mary Ann Wolfe Theater where family and friends spoke on behalf of the awardees as awards were presented.