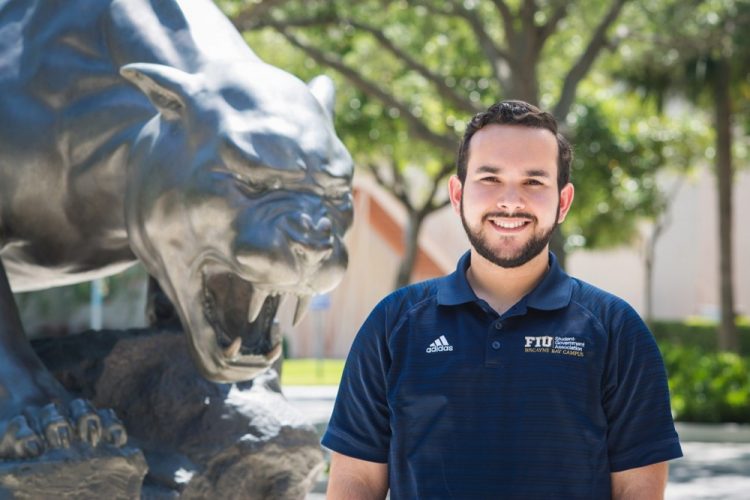 Leo Cosio serves the FIU student body as the Student Government President at Biscayne Bay Campus (BBC). He has been involved with the FIU Student Government Association (SGA) since his sophomore year when he served as the SGA Deputy Chief of Staff for the Modesto A. Maidique Campus before making his transition to BBC to pursue the Broadcast Media major. He is also involved in Delta Sigma Phi Fraternity and Omicron Delta Kappa Honor Society.

Why did you choose your major?
I chose my major because I’ve always been fascinated with TV. I was that 6-year-old kid that stayed indoors and watched the Weather Channel instead of shooting hoops outside.

How has your major helped you in your involvements?
My major has helped me in my involvements in that it has taught me to be more social and speak up when I have a question or contribution to make in a group setting. It also has the added benefit of not being Biology or Accounting, which seem to dominate students’ lives when they pick those majors. I believe involvements should be thought of as equal to classes when it comes to developing a well-rounded student. They both add value to one’s college experience.

Have there been any professors/staff members that have solidified your decision to follow this major?
Professors or staff members that have solidified my decision to follow this major are: Jay Sandhouse, Alfred Soto, Fred Blevens, Susan Jacobsen, Dan Evans, and Kate MacMillan in no particular order. I think all those teachers I listed have each taught me something different about journalism and communications.

What are your plans after graduation and do they involve the field you are studying?
After graduation, I plan to take any job at a local TV station. I want to work in the newsroom right out of college to feel what that’s like. Eventually I want to become a reporter and possibly an anchor down here somewhere in South Florida. I think I then want to go back to school, to FIU of course, and get a Master’s in Public Administration. I am also exploring Washington, D.C. as a possible second home later in my career.

What kind of impact to you hope to make with the tools given to you through this major?
I hope to make a huge impact in the political journalism arena by giving my audience insight into political discourse and how what is going on in Washington or Tallahassee affects them. The First Amendment is clear; its authors intended for there to be freedom of speech in every aspect of society including critiquing the political arena and exposing any injustice.

What piece of advice would you give Freshmen who are deciding what career to follow?
What I would tell Freshmen who are deciding what career to follow is to actually try out their interests through internships, shadowing, etc. You don’t know what you want to do until you try it or see it in person. That’s exactly what happened to me in high school when I thought I wanted to pursue meteorology in college. I reached out to two well-known weathermen and got the opportunity to shadow each of them for a day. Although I still enjoy learning about meteorology I soon realized that it was not what I wanted to make a career in; I switched my major to Broadcast Media the first day of my FIU orientation and haven’t looked back.