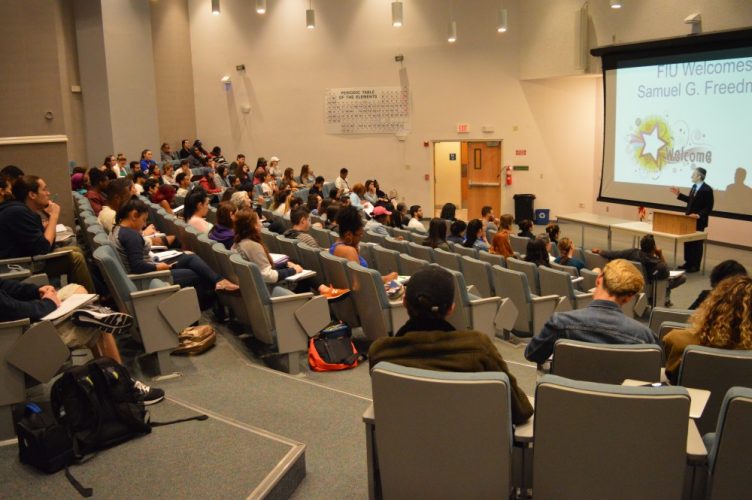 In the years immediately after World War II, having defeated fascism abroad, America had to decide how to reckon with its own long history of racial and religious bigotry. One of the most important turning points came during the Democratic convention in the summer of 1948. The young, idealistic mayor of Minneapolis, Hubert Humphrey, had already made his reputation in attacking that city’s entrenched Antisemitism.

At the Democratic convention, Humphrey defied his own party’s incumbent president, Harry Truman, to persuade the delegates to adopt a civil rights plank for the first time ever. The effort of Humphrey and his allies, including the African-American labor leader A. Philip Randolph, began the process of driving segregationists out of the Democratic Party and fully extending the benefits of the New Deal (and, ultimately, Lyndon Johnson’s Great Society) to Americans of all races.

Florida International University hosted award-winning author Samuel G. Freedman for a talk based on a forthcoming biography about Hubert Humphrey’s role as a civil rights pioneer on Wednesday, Jan. 24, at the university’s Biscayne Bay Campus.

The event was a part of the Hearst Lecture Series co-sponsored by The William Randolph Hearst Foundation and the office of Vice Provost Steven V. Moll.

Freedman is the author of eight acclaimed books, including “Jew vs Jew,” about intra-community conflicts in the American Jewish community; “Breaking the Line,” a tale of two coaches at historically black universities and the how they used football to fight segregation; and “Small Victories,” which chronicles the efforts of an urban high school teacher to prepare her students for college.

A former reporter at the New York Times, Freedman later wrote the paper’s “On Education” and “On Religion” columns. He is a professor at Columbia University’s Journalism School.

Freedman touched upon his experiences as a journalist, answered student questions and spent a few minutes networking with the class, which included students from the FIU School of Communication + Journalism.