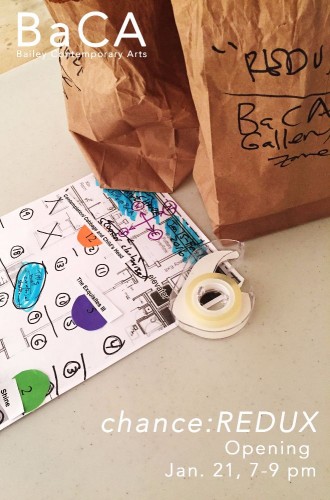 On Thursday, January 21st, Bailey Contemporary Arts opened REDUX: Taking Measure of Chance and Outcomes. The exhibit, curated by MFA in Visual Arts: Curatorial Practice Track candidate Meg Kaplan-Noach, is a collaboration between Kaplan-Noach and the Crit Club, a group of seven diverse professional artists located in and around FATVillage.

In REDUX: Taking Measure of Chance and Outcomes, curator Kaplan-Noach challenges her own role by utilizing the concept of curation-by-chance as an exhibition-organizing methodology. She actively works to remove a unifying theme and, instead, explore the subtleties of serendipity.

The Crit Club includes Leah Brown, Christian Feneck, Virginia Fifield, Bonney Goldstein, Henning Haupt, Donna Haynes, and Peter Symons. The Crit Club was initially formed to provide each other with ongoing, no-holds-barred criticism. Although they wished to collaborate on an exhibition, they found that discovering a conceptual binding to fix the show was proving difficult. Therefore, as their first curator charged with organizing their first show – now a traveling exhibit – Kaplan-Noach’s role was to probe, ponder, and propose a justifying logic to fuse their artworks together. She developed a scholarly methodology of chance, inspired by its occasional use by art institutions as a convention to prohibit making aesthetic choices for how works become associated with each other. Thus, in this exhibit, she deliberately attempts to negate privilege, in order to eliminate the curatorial eye. This emphasizes the individuality of the Crit Club members, while acknowledging the group ethos.

The included artworks have been organized in the Bailey Contemporary Arts gallery through methods of chance, although the previous Box Gallery exhibit had a slightly different set of parameters. In that case, there had been three various flexes or iterations. This show at Bailey Contemporary Arts, however, has only one version. The members were charged with creating three fresh works each with at least one piece exploring and including chance within it as an underpinning concept. As such, these artworks are being exhibited here for only the second time.

Drawing artworks one-by-one from seven brown paper bags – one for each artist’s three works – each grouping was thus arranged according to chance. The Bailey Contemporary Arts gallery was also divided into seven consecutive areas, each with a corresponding number (also put into a separate brown bag). Then, one at a time, the seven artists’ names were picked out of a bag, each picked simultaneously with a corresponding gallery position. Thus, a specific group of artwork was situated in a specific spot of the gallery.

It is hoped that the brown paper bag drawings for this exhibition will uncover the elusive visual manifestations of chance. It is the gallery’s hope that seeing these artworks under these conditions will permit the viewers, artists, and the curator to fully experience how chance makes meanings that may not have previously existed through the use of more conventional curatorial methods of judgment. In this scenario, chance decides and chance rules.