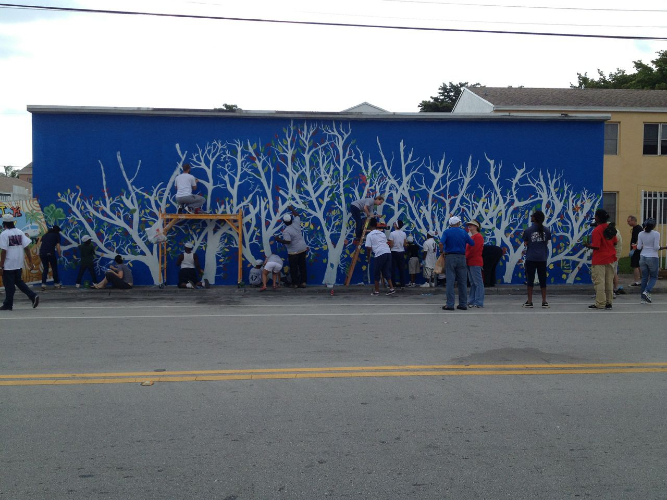 Across the street from the Kwik Serve advertising “subs, lotto, cigarettes 24/7” and half a block from the Full Gospel Worship Ministry on N.W. 15th Avenue stands a 40-foot wall. One side anchors a computer lab for the residents of the Liberty Square public housing project. The other side fronts the gritty realities of life in Liberty City. A faded mural of African-American heroes covered the wall until recently. Years past its prime, residents no longer even looked up when walking past.

Today a new mural covers the wall. “Tree of Life” is a vibrant metaphor for the promise of a community and the resilience of its residents. Created by the people of Liberty Square in collaboration with FIU and community organizations, the piece is a work in progress, much like the children who created it.

It’s 9 a.m. and Liberty City is rising with the sun. The sounds of Liberty Square’s impatient babies and playful children fill the air, traffic begins to pick up along N.W. 15th Avenue, and the sun climbs in the sky on a near-perfect spring day. At the mural, volunteers arrive, setting up drop cloths and scaffolding, lining up cans of paint and paint trays. Residents of Liberty Square begin to filter out onto the sidewalk. A pick-up truck filled with men passes slowly, its occupants flashing the thumbs-up sign as the driver honks the horn. Word has spread that this is the final day to work on the half-finished mural, and people are excited.

Jasper Adell is the first to arrive. He’s come to the event with his grandchildren, 4-year-old Ashante and 3-year-old Devin.

“I’ve been in Miami for 50 years and I’ve never noticed what’s on this wall before,” Adell says, squinting at the facade. He pulls on his cigarette and exhales. “This wall looks beautiful now. It makes the neighborhood look nice.”

Members of the College of Architecture + The Arts had learned about this faded stretch of wall nine months before thanks to a tour of the area led by Elaine Black of Liberty City Trust.

“We were doing communication facilitation work with the Liberty City Community Revitalization Trust and talking about the many challenges and opportunities that exist in Liberty City,” says Char Eberly, faculty administrator in the Communication Arts Department. “I thought of all the talent in CARTA and wondered what could happen if others got involved.”

During the tour, faculty artist Pip Brant noted the lack of landmarks and points of visual beauty. Black pointed out the Liberty Square wall and voiced her hopes for a new mural. On the bus that day was Communication Arts advisory board member Judge Raphael Steinhardt. He presented a challenge to everyone present: He would “pick up the tab” if FIU took on the project.

The long road back

Built as part of the New Deal by the Public Works Administration and opened in 1937, Liberty Square was the first public housing project for African Americans in the southern United States. The 753-unit complex, clean and spacious compared to the crowded living conditions experienced by African Americans living in Overtown, was built as a “negro colony” on the outskirts of Miami to lessen the potential spread of diseases such as tuberculosis. The first residents of Liberty Square benefitted from these new surroundings. They were upwardly mobile individuals, most of whom worked as domestics and laborers. Families – and the community – flourished. When families moved out of Liberty Square, it was typically because they had purchased single-family homes or because their income had become too high to live in the public housing project.

Much changed in the 1960s, including Liberty Square. Poverty, crime and a simmering rage slowly squeezed life out of the once-vibrant community. Drugs. Gangs. Race riots. All of it and more played out on N.W. 15th Avenue, much of it a stone’s throw from Liberty Square.

Known to neighborhood residents as Pork ‘n’ Beans because of a brownish-reddish color that once covered the complex, today Liberty Square is still a shadow of its former self, but pastel hues have replaced the dark color, and a strong resident council and resolute group of individuals who refuse to cede the community to the criminal element have things moving in the right direction.

‘Let’s do something different’

Jacek Kolasinski, associate professor and chairperson of the Department of Art and Art History, wasn’t interested in imposing an outsider’s will onto the project when he agreed to get involved. He wanted the community to be invested in the mural, so four or five meetings were held with residents and neighborhood children.

The idea of painting a tree came from those meetings. It was obvious Kolasinski loved the idea, says Nikita Ivory, executive operations manager of the Liberty City Trust.

“At first they wanted heroes. You know, Malcolm X, Martin Luther King, Jr. Let’s be honest,” says Ivory, “we already have lots of those murals. Jacek said, ‘Let’s do something different.’ And one of the kids said, ‘How about a tree?’ Jacek just took the idea and ran with it.”

The initial painting took place in April. Five weeks later, the children, residents, community leaders and FIU students and professors were back in a happy scene of controlled chaos. The children used laser-cut stencils and stamps created by FIU’s fine arts students and received help from FIU volunteers as well as students from Miami Northwestern Senior High. Maria Lovett, of the Education Effect, was there with a group of students who will comprise the university’s second cohort of Golden Scholars.

Michael Rodriguez, a communication coordinator in FIU’s Communication Arts Studio, participated in both outings. He loves the idea that the kids played such an integral role in the mural’s creation.

“Every time they drive by they can say, ‘I made that. I painted that leaf.’ It teaches them that something beautiful can come from nothing.”

Kolasinski has big plans for the mural. He’s left behind the supplies with the hope that residents will add leaves to the mural throughout the year “when something good happens” in the community. Eventually, he would like to add an electronic ticker running the length of the wall that would feature the writings of the Liberty Square children working in the computer lab on the other side of the mural.

“The idea is for the mural to keep growing and evolving,” he says.

If the vibe on May 25 is any indication, it will.

“I grew up in Liberty City, in a house a few blocks from here,” says Terese Campbell, who works in FIU’s English Department at Biscayne Bay Campus. Campbell no longer lives in the area, but when she learned of the project, she made it a priority to attend. “Trust me, N.W. 15th Avenue has seen its share of heartache and pain, but Liberty City is a hidden gem. We just need more of this around here.”