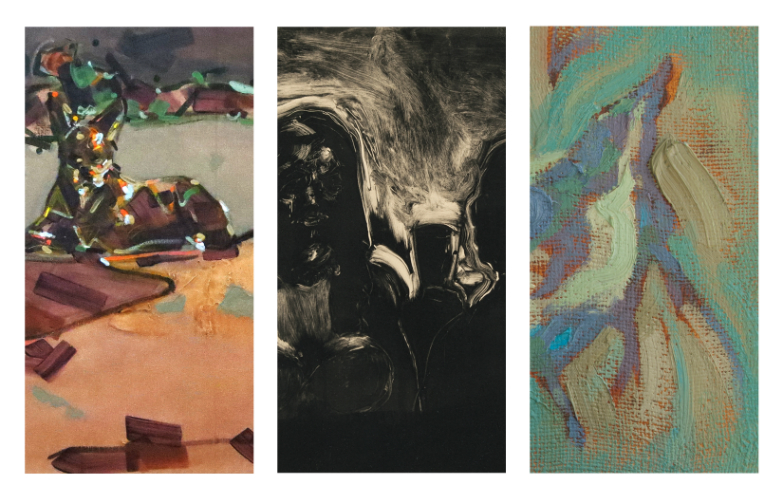 “Painting is Not Dead:” Alumni Group, Sérverus featured in a New Exhibition

A group of young artists named Sérverus derives its name from a ferocious, mythical creature.

“The group’s name is a Spanish-language pun on Cerberus, the three-headed canine monster of Greek mythology [that] guards the entrance and exit to the Underworld,” said the artists. “Sérverus evokes ‘ser veraz,’ or ‘to be true’….”

In the midst of critics that consider painting an outmoded form of expression, Sérverus seeks to prove them wrong through their new exhibition. The artists “stay true” to painting.

Sérverus includes FIU alumni Alvaro Labañino, Jefreid Lotti, and Miguel A. Saludes. All three received Bachelors of Fine Arts – Labañino and Saludes in 2012, and Lotti in 2013. Additionally, all three have had featured shows at The Patricia & Phillip Frost Art Museum, and, together, opened at Miami Beach Urban Studios with their show Bus, Sweat, & Tears: Second Route in 2012. It was after this exhibition that Labañino, Lotti, and Saludes decided to call themselves “Sérverus.”

Ricardo Pau-Llosa discovered the three young artists when he visited their show at Miami Beach Urban Studios. He decided to start working with them, and, today, is the curator behind their new exhibition at Amat Art Gallery.

In their new work, Labañino, Lotti, and Saludes focus on the individual in relation to his/her own environment. Each artist conveys this emphasis differently. However, all three use paint as a significant medium.

Alvaro Labañino paints the theme of isolation, displaying it as an experience of the artist. He frames his works in a way that makes them appear as “slits,” as he described them.

“I believe that it’s possible for me to, at some point, be able to reach people at a very profound emotional level,” said Labañino. “That’s the purpose of these new paintings [of particular scenarios] that I’ve undertaken…and have framed as ‘slits.’ They’re paintings that the common person should be able to thoroughly relate to – at least, that’s my ultimate goal.”

Jefreid Lotti creates monotypes to shed light on human experiences. He often uses the painter’s palette as his “canvas” on which to depict his images. The ensuing contrasts in his pieces demonstrate an alternative view on the subject matter.

“I like the idea of creating a one of a kind art object,” said Lotti. “In a mass produced, pixilated, cluttered, and monotonous world, I propose a rest for tired eyes to meditate, analyze, and reflect what the piece says about the human condition.”

Miguel A. Saludes applies gestural technique and abstraction to his paintings, which depict the quotidian and commonplace.

“I enjoy giving protagonism and beauty to the fleeting and the mundane, even to what is perceived as ugly and grotesque, “ said Saludes. “This allows me to share a different perception of life with my audience.”

The majority of images in Saludes’s pieces relate to his own upbringing in Cuba, from which he migrated when he was sixteen-years-old. “[Childhood and adolescent memories] are often the source of my creative imagination and identity. These childhood experiences are my only tie with heritage. They define me as Cuban; that’s why I like giving them protagonism in my work.”

Fernando Martínez, the director of the Amat Art Gallery – along with curator Pau-Llosa – is proud to host Sérverus at the space. Martínez noted what viewers could take away from the upcoming show: “[t]he incredible talent of the three emerging artists of Séverus, whose passion for painting as a living art and high level of skill and creativity makes them worthy of our admiration and support.”

For more information, visit the event page for SÉRVERUS on Facebook.