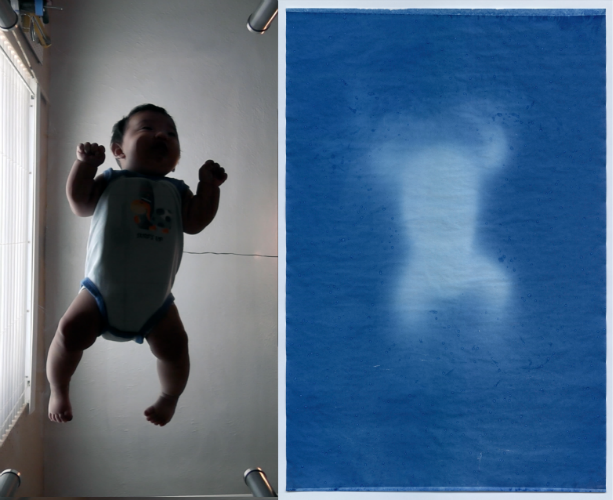 College of Architecture + The Arts’ Professor of Fiber Art and Painting Pip Brant and Professor of Drawing Michael Namkung will exhibit their artwork at FIU’s Patricia & Phillip Frost Art Museum. Viewers will discover a common theme between the two artists’ works: action.

Brant will exhibit Re-Enactments, which addresses the seemingly common practice of false, historical depictions, particularly through the re-enactments of battles. Namkung will exhibit Baby Pictures and the People’s Lullaby Collective, a two-part show that focuses on “the art of parenting,” and on the human being’s development of bodily, motor skills in the infant and toddler stages.

Brant received a Master of Fine Arts in Painting, Printmaking, and Performance Art from the University of Wyoming. For a year, she taught at Truman State University, and took courses on Fiber Art.

According to the Patricia & Phillip Frost Art Museum, Brant has curated two exhibitions at the Frost, has exhibited her own work in Belfast, Ireland, Lithuania, and London, and has been awarded the Wyoming Arts Fellowship and the South Florida Cultural Consortium for Visual and Media Arts for her exhibition Tabled Reports.

“The question I want to play with [in Re-Enactments],” said Brant, “has to do with color switches and abstractions that sweeten the gory truths usually romanticized by traditional, panoramic, historical painting.”

The show will also include embroidery, an art form she adopted after watching Native Americans do beadwork.

Brant grew up living on some of South Dakota’s reservations; her father worked for the Bureau of Indian Affairs and Indian Public Health. She would watch the Native American elders create works from beads. “I had Indian friends – we called them Indian grandmothers – that tried to teach beadwork to us. I couldn’t thread the needle for the life of me….It’s a hard craft. I tried, I tried to do it….It’s amazing what they would do.” Brant says humorously, “The embroidery comes back to attempts to do beadwork.”

Just as the “Indian grandmothers” put their knowledge and narratives into their beadwork, Brant does the same through her embroidery in Re-Enactments.

At the same time, her embroidery pays homage to the medium of tapestry, used frequently in past civilizations to illustrate battles and tell stories.

However, she adds her own satirical twist to this historical relationship between war and art – whether in the form of re-enactments, painting, or embroidery.

“The information I have in my [pieces] are not accurate one bit,” said Brant. She wants viewers to think about history and the way it could be subjectively recorded.

Brant admits, “I don’t think you ever get it right – history – because you’re not there…But it does determine our legends, our morals, and…our values and what we think is right and wrong. But I can’t control it….I hope to help people question – to always question…how it’s recorded and how it sort of gets reduced to ashes [quickly].” 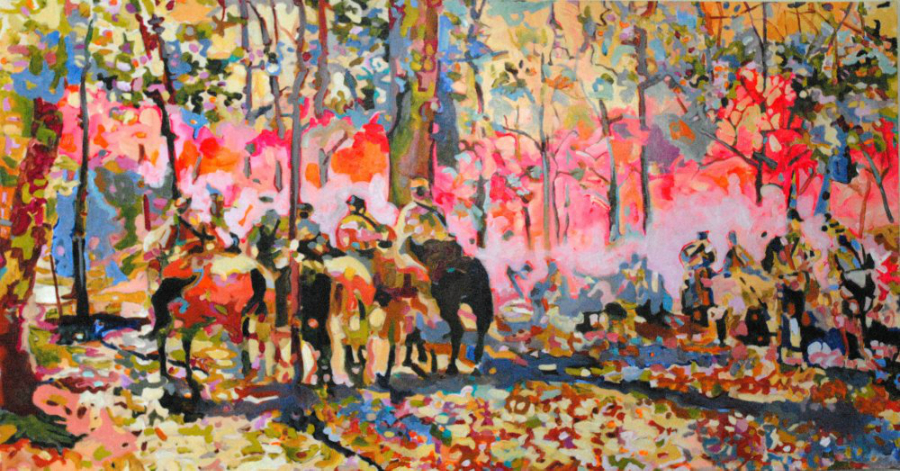 Michael Namkung received a Master of Fine Arts in Drawing and Painting from San Francisco State University. He has exhibited at SFMOMA, Yerba Buena Center for the Arts, and Headlands Center for the Arts. He has been awarded the 2010 James Rosenquist Artist in Residency in Fargo, North Dakota, the Investing in Artists Grant from the Center for Cultural Innovation, and a Tanne Foundation Award.

In Baby Pictures and the People’s Lullaby Collective – a two-part exhibition – Namkung utilizes both visual and sonic mediums.

He is known for his emphasis on the human body and movement. Viewers noticed these themes in last year’s Drawing Gym 2: This Time It’s Personal, which exhibited in San Francisco’s Art 94124.

“The Drawing Gym 2: This Time It’s Personal projects encourage people to become aware of their bodies and to explore their physical limits during the activity of drawing,” said Namkung. “I’m interested in testing discomfort, giving permission to experience pain, and the meaning of failure. I have a continuing preoccupation with the expression and representation of the vulnerability that is exposed under these conditions. These experiences are also registered as biomorphic drawings composed of marks that refer directly to spatial and temporal measures of the body, as well as to attempts to repeatedly delineate and reveal its shifting boundaries.”

Namkung continues to emphasize body and movement in Baby Pictures, through the images of his rolling, scratching, and crawling son. “You don’t have to ask a baby to explore his or her physical limits—it is their developmental imperative to do so at every given opportunity. Working with my son felt like a natural extension of my work.”

Namkung put a layer of black ink on a plate, and, on top of that, put a sheet a paper for his son to lay on, facedown. As his son moved on top of the paper, his body joined the sheet and the ink underneath, creating the monotypical images that Namkung will display for Baby Pictures. Additionally, Namkung recorded his son through ghost-like, cyanotypical imagery, which depict the ephemeral nature of the movements.

Namkung started Baby Pictures to record what, otherwise, could be forgotten. “I began this project wanting to use a drawing process to document the movement and physical growth of my newborn son over time—in the same way that parents take photographs of their children…in an effort to preserve memories of experiences that are constantly disappearing….I make these in order to create and consolidate memory, and to deal with loss.”

As a part of Baby Pictures, Namkung will provide a crawl and play area in the museum. 900 square feet of foam alphabet tiles will be set for babies and toddlers to roam during weekly activities.

“This creates a space that addresses the needs of young children to move and touch,” said Namkung, “which goes against the message of restraint children receive when in these types of spaces (don’t run, don’t touch, be quiet, etc.).”

As the second part of Namkung’s exhibition, The People’s Lullaby Collective, the artist has asked parents to record themselves singing lullabies to their children. These recordings, in turn, will be played on CD as viewers observe the images of his son.

“Lullabies signal and induce the transition between the lucidity of wakefulness and the unknowability and inevitability of sleep – we sing them to provide our children safe passage into this darkness. Through our voice, we create intimate symbols of the complex emotions that come with the work of raising children.”

Brant and Namkung will represent the FIU Art + Art History Department through subject matters that, however different, involve action, whether in the form of a battalion or a baby. Brant depicts war, and soldiers that await the start of a battle or charge. Namkung depicts his son’s scratching, rolling, and thumping, and parents singing lullabies to their sleepy children.

Frost Art Museum Director Dr. Carol Damian describes the annual Faculty Exhibition as an opportunity that benefits both the artists and the museum. “…[I]t gives the faculty an opportunity to prepare for a museum show…to have a museum show…[and] to prepare a new body of work….” For the museum, she said, it generates a new group of visitors. “When we do these exhibits, probably seventy-five percent of the people that come have never been here before….We want to bring a new audience here and, at the same time, show that we have a really talented group.”

Damian is proud to invite faculty exhibitions to the venue. “We feel that honoring our faculty and our students by having their exhibits here,” said Damian, “is the perfect way to disseminate the information to the community that we have a very talented art department.”

The Opening Reception for the Frost Faculty Show: Re-Enactments by Pip Brant and Baby Pictures and the People’s Lullaby Collective by Michael Namkung will be Wednesday, September 18 at 6:00PM, at The Patricia & Phillip Frost Art Museum, 10975 SW 17th Street
Miami, FL 33199. Refreshments provided. Free and open to the public.