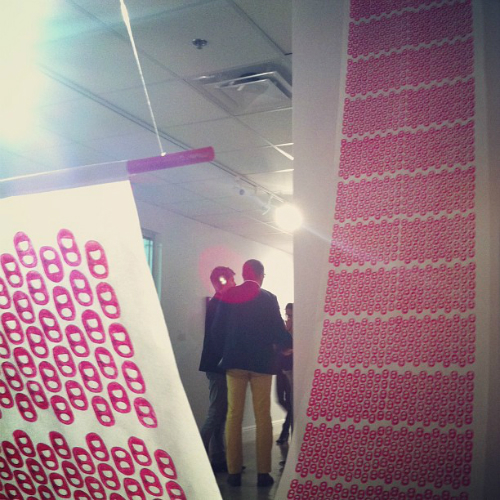 “My Future Husband (Prayers to the Sky)” by Angel Marin

In Spring 2013, Dr. Tyler Wasson, then a post-doctoral fellow at FIU’s Counseling & Psychological Services (CAPS), decided to focus his post-doctoral project on creating an atmosphere where LGBTQ students feel safe and supported. He decided to produce an art exhibition. Wasson, however, had never started an art show before. With the help of curator Ian Honoré, a FIU alumnus who recently finished a BFA in Installation Art and New Media, Wasson’s idea was brought to fruition.

Wasson met Honoré through Dr. Alpesh K. Patel, Assistant Professor and Director of FIU’s MFA Program in Visual Arts. Once Wasson and Honoré started on the project, flyers were displayed and announcements were made throughout the FIU campuses with the intention to invite student-artists who relate to the LGBTQA community – the “A” being for “Allies.” Wasson and Honoré successfully reached out to seventeen students that wanted to express LGBTQA ideas and concerns through art.

The work of each student was on display for the June 7th opening night of < body> matter: the body queered, queerness embodied, which involved a range of artistic media, including live poetry, performance art, video, and sculpture. During the exhibition’s run, <body> matter was featured on the Miami-Dade Gay and Lesbian Chamber of Commerce website.

Through <body> matter, the seventeen student-artists gained both the opportunity and challenge to express themselves as LGBTQ members and allies.

Curator Ian Honoré worked closely with the student-artists. When reflecting on the seventeen students, he said, “The voices are quite diverse, featuring a range of mediums from the most traditional to the most contemporary….” He also mentioned that the artists seek to veer from the mainstream debates on LGBTQ rights. Through the show – and its closing panel discussion – he expects their art to “complicate queer politics for its viewers…[and] also celebrate and share all the wonderful aspects of queers and their culture(s)….”

In addition to curating the show, Honoré gave the exhibition its title. He explained the format of <body> matter, saying, “The title of the show is essentially referencing HTML code and [web]page layout jargon in general. The ‘body matter’ of a publication is the text itself, the ‘substance.’ ‘<body>’ in HTML designates that we are now entering the body matter of the website.”

In regards to word choice, Honoré said that “body matter” indicates an emphasis on the human body and the cultural preconceptions related to the body. “The point I am making is that no matter how objective we try to be when looking at the body, we can never escape the references to the body we have learned culturally…. The title suggests that no ‘real’ body can be conceived because, in structuring any idea of the body, there is already a referent that needs to be contended with, [i.e.] existing ideas or discourses [about] sex, gender, and orientation (much like the invisible source code of a website); hence, ‘<body>.’” 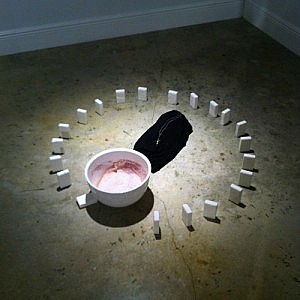 One student-artist named Saranhais Zerpa, a Senior studying towards a B.A. in Art and another in Asian Studies, was intrigued by the exhibition’s potential. She viewed her own participation as a way to step out of her own comfort zone. “To perform and be able to communicate my emotions successfully felt like a kind of breakthrough for me on a personal level.”

Zerpa’s piece, entitled “Washing,” involved the artist in her mother’s old black dress, wearing a cherished necklace with a cross, and sitting in a circle made of twenty-one white bars of soap. During her performance, she washed her hands and arms vigorously.

“This piece [is] not just about religion,” she said. “It’s about desperation, repetition, guilt, the feeling of failing to fulfill a legacy, and the difficulty of self-acceptance. We can’t wash away what is inside of us.”

Seeing such expression were Wasson and Honoré’s expectation for the show.

On Friday, August 30, Wasson and Honoré conducted the closing reception of the show and its ensuing panel discussion, which included Dr. Alpesh K. Patel , Dr. Maya Boutaghou (Assistant Professor in Modern Languages and Women Studies), and Dr. Steven Blevins (Assistant Professor in English and Affiliate Faculty in African and African Diaspora Studies). At the reception, the panel conversed with audience members and started an educative and beneficial discussion on queer identity. The conversation indicated the exhibition’s importance, whether psychological, political, or simply personal.

“I see art as being very personally expressive,” said Wasson. “…I grow at the same time that I’m creating it.” Wasson wanted the art to spark this growing, learning experience not only for the artists, but also for viewers and all those invovled in <body> matter. In this way, each person, through the art, would learn about his or her own being.

Wasson seeks out similar growth experiences in his patients at CAPS, which is why he felt <body> matter to be a suitable channel for discussing LGBTQA identity. “I wanted to take what I do at the counseling center outside of the counseling center. [I wanted it] to be accessible to more students.” He hopes that the art show becomes a new tradition for the FIU student body.