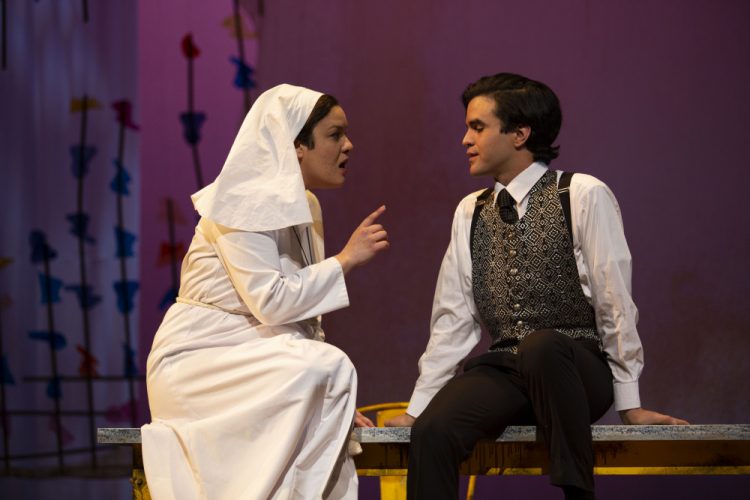 Shakespeare Tackles Abuse of Power with Measure for Measure

FIU Theatre’s production of Shakespeare’s Measure for Measure will leave audience members pondering, to save a life, would you sell your soul? This central theme unravels through various plots created by the network of relationships in this Shakespearean world.

“It was written a couple hundred years ago, but it seems to be talking about what’s going on in our lives now,” says director and associate professor, Michael Yawney. “It’s about people in a country who are trying to restore that nation to its former greatness while stumbling over their own shortcomings as people.”

The central plot involves a young nun, Isabel, who begs a judge to spare the life of her brother who committed a crime. Angelo, the judge, tells the young nun that he will spare her brother’s life if she engages in a sexual relationship with him.

“The questions that she asks and the thoughts that go through her head are exactly the ones we’ve been reading in the news or following on Twitter,” says Yawney. “I don’t think it’s surprising that a character in fiction would actually behave in the way women would behave in real life and have the thoughts real women have had. What is surprising is that a man writing 400 years ago would have the insight to understand how a woman feels like when faced with that kind of assault.”

Shakespeare is still widely produced all around the world. His plays have a tendency of creating a network of characters. For example, Angelo was put in power by the Duke. The Duke then goes undercover as a Friar so he could see things from a new perspective. He ends up getting a close look at the struggles of his citizens.

“The play really creates a world,” says Yawney. “This is not the kind of modern American play where it’s about one character and another character and their relationship issues, it’s really a play about a whole society, a whole world, where people from the highest to the lowest classes appear and we see how one thing that happens on one end of the spectrum creates ripples that affect all of the other characters.”

Director Yawney grew up loving the play, but even now is still discerning the story, coming out of rehearsals with a different view of the show from when he started.

“The play is kind of like a pleasant game of whack-a-mole. Every time we think we know what the play is, it turns out it’s going somewhere else and it’s about something else. It’s one of the most surprising rehearsal periods I’ve ever had.”