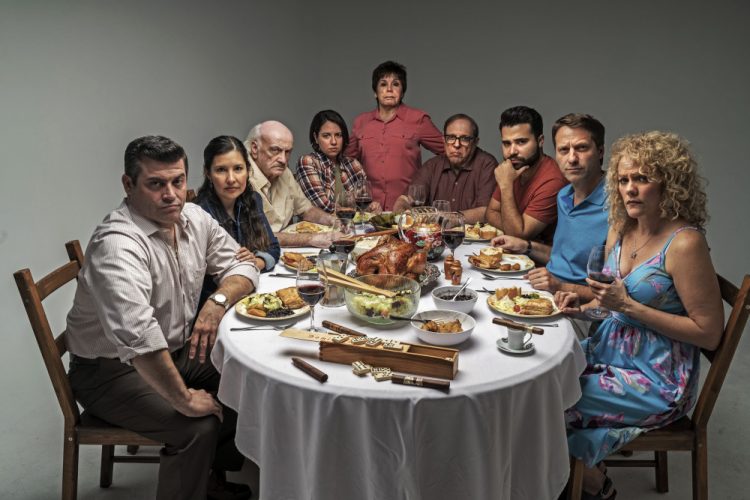 Four years ago, FIU Theatre alumnus Michael Leon saw a Broadway play that changed his life – just not in the way he had hoped. The play featured a cast of Latino actors and Leon entered the theatre eager to see his people represented on stage. By the end of the show, he was aggravated.

“I felt like it was a show that was meant for white audiences, to satisfy the way they view us,” recalls Leon. “It made me angry and I just started to write.”

Leon’s desire to see his people authentically represented on stage has blossomed into a world premiere production of his new play, The Cubans, which is set to hit the Miami New Drama stage this weekend at the Colony Theatre in Miami Beach.

The play is as Miami as it gets and FIU Theatre alumni are a big part of the creative team bringing it to life. The show is directed by Victoria Collado, whose most recent project was the smash-hit immersive theatre experience, Amparo. The cast of The Cubans features performances by Ashley Alvarez and Adriana Gaviria, and the show’s costumes were designed by Caroline Spitzer.

The FIU community is invited to the Sunday, January 26th performance at 3:30pm with a 30% discount on tickets (use code “FIU30” at checkout). After the performance, Brian Schriner, Dean of the College of Communication, Architecture + The Arts will moderate a talkback with the FIU alumni.

Leon drew much inspiration from the classic American family dramas he grew up loving. Plays like Long Day’s Journey Into Night, Death of a Salesman, and August: Osage County follow a tradition of giving audiences a glimpse into the inner workings of a family. While those stories are largely universal to all families, there’s an element that was missing for Leon to feel fully represented.

“I’ve never seen my family up there treated with the same respect that you see in the American family dramas,” says Leon. “I wanted to write my story, about my family and my people.”

“It’s the first time we’re looking at our people on stage this way,” says Collado. “I’m done with the idea that the only place for Hispanic people in the American context is as immigrants in the act of emigrating. This play is not about what happened in the past and it’s not about immigration. It’s about what this new American family looks like.”

The play centers around Christy, a Cuban-American in her early thirties coming home to Miami for her brother’s graduation. She moved to New York City nine years ago to pursue an acting career, but her life hasn’t exactly fulfilled her mother’s expectations. She doesn’t have a husband, children, or a stable career. Then a big event happens that changes the trajectory of the family and makes them confront what’s happening under the surface.

It’s a play that deals with the inner identity conflict that most first generation Cuban-Americans face as they navigate these two seemingly different worlds.

“There’s a weight that we, as the first generation to be born in the United States feel,” says Collado. “There’s a weight in feeling like we have to make sure our parent’s sacrifice was worth it.”

Collado has spent most of her artistic life seeking to shed light on what that weight means. For her, understanding what happened in Cuba in 1959 is the key to understanding herself. Her last project, Amparo, immersed audiences in the story of the Arechabala family, founders of Havana Club Rum, whose company was seized at gunpoint by Castro’s forces in the early days of the Cuban Revolution.

“I couldn’t have directed The Cubans without first having directed Amparo,” she says. “When we were workshopping The Cubans in New York, I was also working on the pilot for Amparo. There were three days of overlap where I was working on both. In those three days, I came to a huge understanding. It was the first time I saw and felt how my world was completely connected to 1959 Cuba. For the first time I understood that my particular life had changed way before my parents even met each other.”

For the cast of The Cubans, having those conversations on stage have helped unlock key parts of their own family stories. While working on the play, Alvarez began asking her grandmother more questions about her past in Cuba.

“She really opened up to my mother and me,” she says. “Stories both of us had never heard before. I felt embarrassed that I hadn’t taken that initiative before, but the fact that Michael’s story brought all three generations closer is the best thing I could’ve asked for. It really is a gift to be able to understand my own family better.”

Miami New Drama’s production of The Cubans opens this Friday at the Colony Theater in Miami Beach and runs through February 16th. The FIU community can get 30% off tickets for the Sunday, January 26th performance at 3pm using code “FIU30” at checkout. There will be a talkback after the performance.