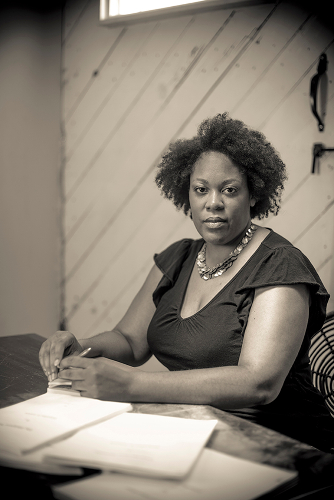 Jacqueline E. Lawton writes to answer the big questions about the world. One of her questions about The Hampton Years was, “How these artists find the focus and determination to create such beautiful and lasting art when everyone around is telling them that they shouldn’t be artists?” This is a valid question that required a great deal of research to answer.

The Department of Theatre is thrilled to collaborate with talented playwright Jacqueline E. Lawton on a dramatized staged reading of her play The Hampton Years. The play’s world premiere was in 2012 as part of Theater J’s Locally Grown Festival, an initiative intended to highlight local stories by local playwrights. Since then, the script has been rewritten in development with Virginia Stage Company. On Sunday, October 19, at the first rehearsal in preparation for Monday’s performance, Ms. Lawton heard the edited draft for the first time.

The idea for The Hampton Years came from the author’s interest in exploring the relationship between African Americans and Jewish people, two groups that have shared a history of oppression and exclusion in history. She was particularly interested in the time period when these two groups were able to come together in support and encouragement of each other. When asked what compelled her to tell the story of Viktor Lowenfeld and his relationship with students Samella Lewis and John Biggers, Jacqueline responded, “I started doing research to learn about professors who went to teach at historically black universities. I found out about Viktor Lowenfeld, this Austrian Jewish professor who choose Hampton Institute over Harvard University. He went on to establish the art department at Hampton Institute at a time when black artists were being encouraged to go into trade, become farmers, educators, nurses or do things that were considered more practical. I loved the story that revolved around creative expression and using art as a tool for social justice and advocating for racial equity.”

Ms. Lawton holds a BA concentration in theatre and dance, a BS in radio-television-film, and an MFA in playwriting. She has been recognized as one of the top 30 national leading black playwrights by Arena Stages American Voices New Play Institute. Growing up watching musicals starring Gene Kelly, Fred Astaire, and Judy Garland, she always knew that a future in theatre awaited her. This was a difficult decision, since it was a career choice which came with the challenge of learning how to overcome the fact that very few female playwrights are produced each year and there are fewer opportunities for women of color in the theatre. This knowledge was a main contributor in her shift in focus from acting and writing to writing. In an effort to rectify the inequality she saw, she decided to concentrate on writing more roles for women and women of color. She is inspired by the next play that needs to be told, the next story out there, the next character that needs to be introduced. According to Jacqueline, “I don’t want those coming after me to struggle as much as I did in terms of finding a place for their voice. We need a greater sense of diversity in our stories that are selected, our playwrights that are chosen, in our actors, directors, designers and artistic directors. That’s what inspires me to continue doing this work. I want to create space for more artists do continue doing their work and be viable artists telling stories in the community”

Jacqueline had some insightful advice for students pursuing a degree in theatre; “first and foremost, don’t compare yourself to anyone else and always strive to be better than yourself vs being better than someone else. Be clear about your definition of success. I always encourage young people to become professionals and view theatre as a profession, not just a passion. Be your own PR person by creating your website and being in charge of your personal narrative. Educate yourself on the business side of the work you are doing and try to find a balance between mastering the art and the business.”

Ms. Lawton is excited to see how the South Florida community will respond to the play. She is always interested in learning what compels audiences to become interested in a particular production. This is also an opportunity to learn about the issues that need to be addressed in the community. This play is very special to her as it was read and liked by Samella Lewis, an extraordinary woman for whom she has great respect and admiration.

For more information about The Hampton Years, a dramatized staged reading, click here.