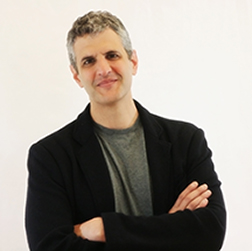 The Department of Theatre wishes to congratulate Joseph Haj (Class of ’84) who was recently honored with the 2014 Zelda Fichandler Award from the Stage Directors and Choreographers Society (SDC). Haj was unanimously chosen from 62 other nominated directors for this coveted accolade. According to SDC, the prestigious award recognizes “an outstanding director or choreographer who is transforming the regional arts landscape through imaginative, brave work in theatre.” The SDC chose Haj thanks to his “exemplary artistry, diverse and exciting programming choices, and deep commitment to the arts in North Carolina.”

The Haj family moved to Miami from New Jersey when Joseph was quite young. Growing up in South Florida, Joseph did not find his true calling until his senior year of high school, when he registered for a drama class. As a child of Palestinian immigrants, this passion for the theatre came as somewhat of a surprise to his family, who presumed that he would pursue a career in medicine, law or engineering. However, it was the theatre that provided a much needed outlet for his teenage anger, frustration and loneliness. Joseph earned his BFA Performance degree from FIU in a remarkably short time and went on to complete his MFA from University of North Carolina. He gained the full support of his family once they realized his talent and determination to succeed.

Haj worked as an actor for several years before shifting focus from acting to directing. When asked about the circumstances that contributed to the shift in focus he responded, “it happened fairly abruptly. For the longest time, everything I wanted to explore in the art form, I felt I could explore from the position of an actor. Then, almost overnight, acting began to feel very limiting and specialized to me. I started feeling like a punter on a football team and I wanted to have more ownership of a production, more of a say in how a piece was to be made.”

Joseph Haj is currently the Producing Artistic Director of PlayMakers Repertory Company in Chapel Hill, North Carolina. He has directed and performed in theaters throughout the United States as well as overseas. He has conducted numerous workshops and been nominated for various awards, many of which he has won. American Theater Magazine named him “one of 25 theatre artists who will have a significant impact on the field over the next quarter century.” He has even directed Shakespeare productions at different maximum security prisons regionally. Elaborating on this, he explains that “those of us who spend a lot of time in the plays of Shakespeare go around protesting that Shakespeare is for everyone, even while having the nagging suspicion that that might not be true. I wanted to see if Shakespeare could be performed by those who had never come in contact with the work and for a community that also had little background with the work. The results were thrilling for both the inmates who acted in the productions and those inmates who attended the performances.”

A career in theatre for a man of color comes with certain challenges and Joe shares some of the challenges he has encountered. “It is very difficult to have a career as an artist. Ours is a field that has long supported ideas about diversity and inclusion. There are plenty of unconscious biases that negatively impact opportunities for women and people of color. I spent many years acting in the plays of Shakespeare all over the country, but I have never even had an audition for a Shaw or Moliere play. Women and people of color are under hired as actors, directors and designers.” He also offered some great advice to our aspiring theatre students; “your ambition will want to write checks that your talent cannot yet cash. Be humble, find mentors and learn from those who have gone before. Ours remains an apprenticeship game and what we know is handed down, so find great mentors.”

FIU Theatre is sincerely proud to call Joseph Haj one of our own and we wish him continued success as he strives to bring equity and inclusion to the stage in terms of stories, voices, directors and designers. It is rare to hear someone declare their love for their career and the people they work with, but love epitomizes Joe’s feelings about the theatre. It is truly inspirational to listen to someone refer to their career as a ‘calling.’