The Greenhouse Takes Their Play Development Program Online This Summer

FIU Theatre’s the Greenhouse is back for another summer of new play development. This year, the program is running entirely over Zoom.

Michael Yawney, managing director for the Greenhouse and Joel Murray, FIU Theatre department chair, developed the Greenhouse program, back in 2018, as a way for playwrights to test their scripts and revisions.

Each summer, playwrights in South Florida are selected for one-week intensive residencies to develop and test a draft of a full-length play along with a director, dramaturg and actors. 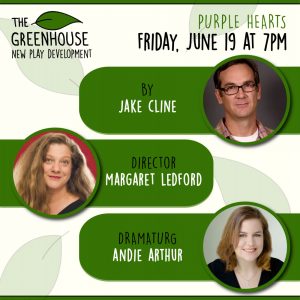 Over the course of the week, the playwright, director, dramaturg and actors meet for three sessions culminating at the end of the one-week workshop with a live public reading to test the script.

“Writing is very solitary, so for most of us, our job is really to dialog with the writer,” says Yawney. “We ask the playwright questions and provide a sounding board for the writer’s new thoughts.”

This year’s series of play workshops kicks off on Friday, June 19th with Jake Cline’ Purple Hearts, which tells the story of a family who comes together for a funeral and is tasked with sorting the legacy that both divides and separates them.

The first workshop is being led by director, Margaret Ledford, and dramaturg, Andie Arthur – both seasoned professionals of the Greenhouse, having worked with the play development program in previous years.

Ledford, who is directing her fourth Greenhouse reading, claims the best part about her role is being able to watch the playwrights at work and finding out what is most important to them and how that manifests itself in the script. 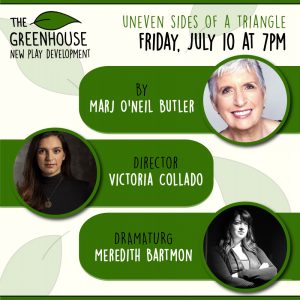 “Through their storytelling, playwrights send the audience on a journey,” adds Ledford. “In the rehearsal room, we get to be both participants of the playwrights crafting and go on the journey.”

Later this summer, Marj O’Neil Butler will have the opportunity to workshop her play, Uneven Sides of a Triangleon July 10th. And FIU Theatre’s adjunct professor, Israel Garcia, will wrap up the play workshops on July 17th with his script, The Words of Dean Man.

Garcia, who was able to have his script, Investments in Time and Money workshopped through the Greenhouse back in 2018, claims the play development program allows for a lot of feedback in a short amount of time, but done in such a way where you can still take it all in.

“Ultimately, the end result is a clearer, smoother text enhancing the essence of the play,” says Garcia. 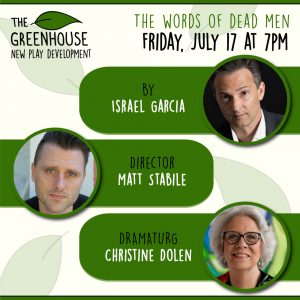 While the Greenhouse allows playwrights to develop their scripts and test them on real audiences, the play development program also offers a great opportunity for students as well. Theatre students interested in the play development project are welcome to attend the three working sessions held in each residency where they can network with the playwrights, directors, dramaturgs and actors involved in the workshop.

“The Greenhouse supports the playwrights of South Florida, but it also helps the theater community by connecting it to our gifted and well-trained students and recent graduates,” adds Yawney. “Through the Greenhouse, they can take a step into the larger professional community.”

Checkout the complete public readings schedule for the Greenhouse 2020.