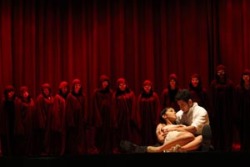 Juan Espinosa (Class of ’08) is a teacher at South Dade Senior High School. He recently wrote an original, award winning one act play entitled, Amygdala, which has been selected to represent the state of Florida at the Education Theatre Association’s Thespians Festival, this coming June, in Lincoln, Nebraska.  The play was first performed at a district competition, held at Hialeah High School, along with thirty other participating schools.  South Dade Senior High and five other schools were then selected to continue on to the Florida State Thespian Festival in Tampa.  This state competition was attended by over seven thousand students and is considered the largest theatre festival in Florida.  Amygdala received numerous accolades from the judges and was the only play chosen from about 50 productions screened at the festival.  At the conference in Nebraska, attendees will have the opportunity to experience other high school performances, attend workshops/master classes, have their work reviewed by working professionals, participate in student leadership programs, and attend auditions for college admission and Thespian scholarships.

After graduating from FIU Theatre in 2008, Juan began his career as a substitute teacher.  In 2009, he joined North Miami Senior High School as a full time faculty member and remained there until he accepted another faculty position at South Dade Senior High School in 2013.  When he wrote this one act play, based on an idea he conceived in a play writing course he took at FIU, he had no idea that it would receive such great reviews.  Juan is extremely proud of his work, his students’ achievements and the cast, which he chose based on acting ability and the talent they brought to auditions.  So far, Amygdala has won an award for Best Play in Florida and a Best Actor Award at the district theatre competition.  Two students, Marco Guerra and Mary Maturana, received superior ratings for their monologues and will have the opportunity to perform them and get feedback from experts in the field at the national conference.

As a side note, this is the second FIU Theatre alumnus to have received the distinction of having their production selected to represent Florida at the national Educational Theatre Association’s Thespian Festival in recent years.  Two years ago Paul Lobeck (Class of ’97) and his Miami Southridge High Spartan Players Troupe 1641, with their production of The Serpent, in the category of one-act plays, was selected for this honor.  Juan’s accomplishment is just further evidence of how our graduates are making a difference in the community.

Despite the stellar reviews and praise the play received, there is a possibility that the students of South Dade Senior High School Theatre Magnet Program will not attend the national conference in Nebraska.  All the schools funds and resources were invested into getting them to the state competition in Tampa, leaving the program with insufficient funds to go to Nebraska.  For the entire cast of 36 to attend, they must raise $31, 000 in a short space of time.  This event is a fortuitous opportunity for these hard working students, and it would be most unfortunate if they could not attend due to a lack of funds.  If you would like help this very deserving group of students and wish to make a donation, click here or send a check payable to South Dade Senior High School Theatre Program, in a sealed envelope, to the attention of Juan Espinosa.