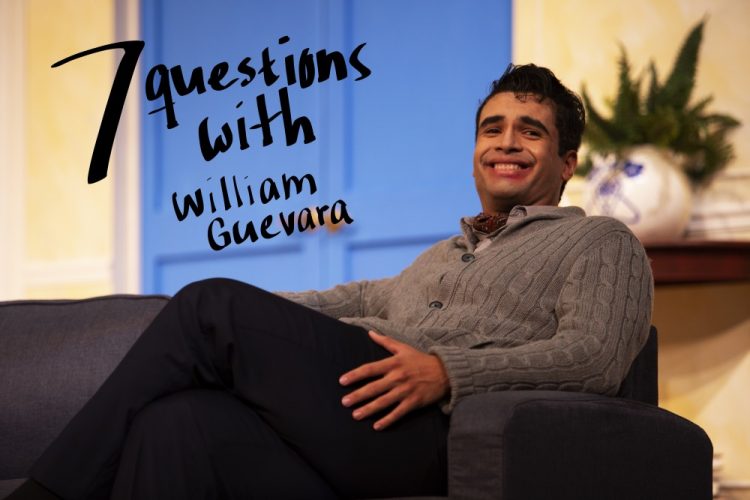 Born in Los Angeles, California, William Guevara is a man with big dreams and an even bigger laugh. A BFA Junior at FIU Theatre, he is currently playing Bernard in Boeing Boeing. William is also a former Navy OSSN who decided to follow his passion in theatre after finishing his service. We were able to sit down with him before his calltime for the show to get to know him better.

Any Judd Apatow movie or anything with Will Ferrell in it. I love the craziness of the man, the situations, the dialogue. And that one Ebay Store scene from The 40 Year-old Virgin. It’s one of my favorite movies. The dialogue is said so flat, but I love it so much.

2. What’s the biggest difference between you and Bernard?

Um, his blatant misogyny? *laughs* I have a carefree attitude and he does also, but he has a tremendous amount of structure. That’s why he goes into such a panic when his structure begins to fail in the play. And I don’t have that kind of structure.

3. What is one thing you miss from your Navy days?

I miss sailing. It’s so relaxing. I mean, it’s a lot of work, but you don’t have to think about many things. You just have to do your work, look at the ocean, and watch dolphins and whales swim right against you.

4. What got you into theatre?

When I got out of the Navy, I was really confused as to what to do for the next part of my life and I decided to explore theatre, which was a side of me that I was afraid of when I was younger. So I went to Miami-Dade and was cast in Lobby Hero, which is a play about a sailor who was in the navy, gets kicked out and gets into a whole mess. The play, the dialogue, and process reminded me of home. Of where I had been. And I was sad when it was over. Once I had that feeling, I realized, “this is what I want to do as a career.”

5. You wrote a play that was selected for New Plays this year. What was it like seeing your work produced?

Oh, I wasn’t expecting to have such a huge, emotional reaction. I thought it was so cool to see something that I had written that was actually very personal to me being performed by two actors that had no experience in that type of life in any sort of way. But to see them do it in such a way that it makes me relive those moments, I think few things in life come close to that.

6. Have you given any thought into who you’ll portray in your Senior Project next year?

I have a few ideas. Some that are controversial, but I have an idea of the direction I would like to go to. I think it is a challenge to choose someone that you share no connection to. So you have to bridge that connection between you and that person you’re portraying. I have a poet in mind, I have a revolutionist in mind. I wanna keep it a secret…

7. What is your favorite project that you’ve done at FIU Theatre?

Boeing Boeing. It’s so fun. So different from anything I’ve ever done. It’s a farce so it’s outlandish. Sometimes, I make faces directly at the audience in order to bring them into my world. And because it’s a farce, we have that freedom to bring the audience in with us. I feel like we, the cast, also found a whole new side to performing. What we’re doing is not just for the audience, it’s with the audience.

Boeing Boeing is currently running at the Wertheim Performing Arts Center and runs through March 3rd. For more information and to reserve your tickets, visit go.fiu.edu/theatre.