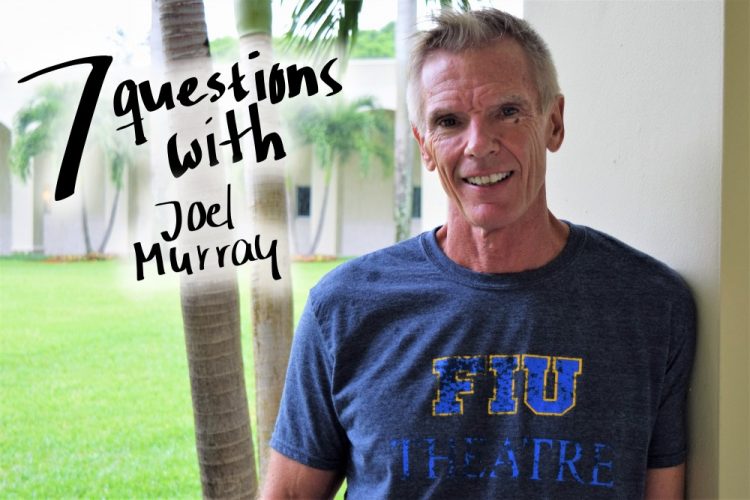 Born in LA, Joel Murray has worked and lived all over the country as an actor, writer, director, and educator. Currently wrapping up his fourth year as Chair of FIU Theatre, Joel’s passions include playwriting and taking care of his animals, especially his horses. We were able to sit down with him in the middle of his incredibly busy schedule to get to know him better.

Oh, everything. I love to laugh. I love high contrast, dark comedy. Stuff like there’s a dead body on the floor and someone steps over it to get a sandwich from the refrigerator. But I also enjoy sitcoms and romantic comedies, like Bridesmaids. Even stupid, sophomoric stuff. Anything that looks funny, I’ll stop and take a look at.

2. What got you into theatre?

I took a theatre class because it fit my schedule.  Loved it.  Became a major without a clue about what to do with it.  After graduation, my girlfriend at the time had an audition and she asked if I wanted to go. I sent in my resume and they asked if I knew how to sing, play guitar, and juggle. So I knew I had to learn how to do those things. I learned how to juggle and play some chords and got called back. And I got it. I started traveling the country performing Shakespeare for kids. Once I actually got into it, I started to think about doing this as a career.

3. What was your most memorable experience as a writer?

There was this one time I wrote a play and we staged it in my living room. I had a house and there was a school nearby so that became our parking lot for the audience. People would come over to my house and put money in a paper bag we had by the front door and we’d let them in. We would have 30 to 40 people come to watch it. I took out all the furniture and used the sound system upstairs for pre-show music and any sound effects. There was this part in the play where one of the characters, this really crazy looking guy, goes outside, gets in a car, and squeals off. So we got to do that live. It was also in the Fall so at the end we would light a fire in the fireplace, people would come and put wine or beer in my refrigerator and they would just hang out after the play was done.

4. What is the best part about owning a horse?

They’re just such beautiful animals. They’re powerful, they’re unpredictable. Which is exciting. It’s great to give them a hug because they’re so big. It’s like you’re a little kid hugging your dad. They have their own personalities. They’re like a part of your soul.

5. What was the biggest culture shock you experienced moving to Miami?

I don’t think there was a shock.  People on the average probably drive a bit more recklessly than other places I’ve lived.  It’s just such a unique landscape.  So colorful and rich.  The architecture old and new is wonderful.  I love the diversity of culture.  Miami is one of those places that almost defies description.  It has to be experienced.

6. What is the coolest thing about being Chair of FIU Theatre?

When students and faculty succeed.

7. What excites you the most about the future of FIU Theatre?

There are so many irons in the fire right now. The graduate program, new initiatives, continuing to develop our production and curriculum programming. New and established faculty continually engaged in forward thinking, and always concerned about student growth and success.  And CARTA is cutting edge.  The college is doing so many impressive national and international projects and we get to be a contributor to that.  FIU Theatre is really starting to gain an awareness in the university and community – that we’re here and we’re doing great work.