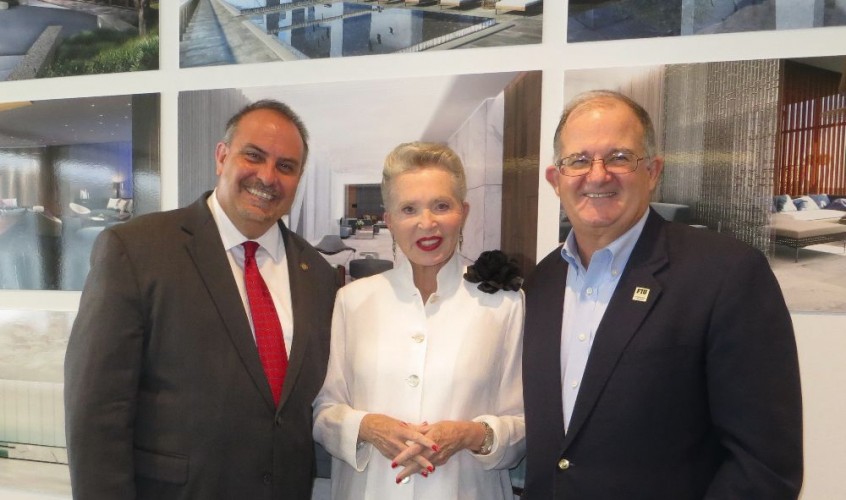 Daniel de la Vega, CARTA Advisory Board member, hosted the board’s dynamic meeting at the Brickell Citi Centre on April 14th. He gave a tour of the magnificent project before the meeting began.

A special participant was Dr. Constance “Connie” Silver, who is a trustee of New York University and a professor. The NYU Silver School of Social Work was named in recognition of their significant generosity. Connie is the creator of the “Whoopie” sculpture at the Paul L. Cejas Architecture building. She and her husband Martin have recently created a scholarship fund for FIU interior architecture students. She said that “the CARTA board gets results” and she looks forward to being a part of the board.

Dean Brian Schriner gave an excellent overview of CARTA’s progress during the past five years. CARTA has increased its contributions to the FIU operation by over 340%. He discussed highlights since the past board meeting that included the grand opening of the RCL production studios on the Biscayne Bay campus on March 20th, where 17 simultaneous rehearsals take place with 1,000 performers, and the fact that Andy Señor Jr., this year’s CARTA Torch Award honoree, completed a successful run of the musical RENT in Cuba.

Rick Tonkinson, CARTA Advisory Board Chairman, discussed the importance of the fundraiser for the Ramon Arbesu Memorial Scholarship on April 29th. The goal is to endow the scholarship with a goal of $25,000. Daniel de la Vega worked closely with Ramon, who was a 2001 graduate of CARTA.

Lisa Merritt gave an updated overview of the FIU Foundation and how it benefits CARTA students.

Rick announced the Emerge Presence exposition at the Miami Beach Convention Center from May 1st to the 5th, sponsored in part by Daniel de la Vega.

Alfred Karram Jr., who represents the Miami Beach Urban Studios (MBUS) on the board, was in Italy working on the interior design of a super yacht. Rick then shared information about the Miami Beach Chamber of Commerce’s Gala on May 9th , currently in its 93rd year, and the strong partnership of between MBUS and the City of Miami Beach during this year’s centennial events.

Gus encouraged board members to participate in the FIU CARTA events and to encourage Lisa to consider an interface of CARTA alumni for giving back.

“The grand opening of the RCL studios and the 800 people attending the Torch Award dinner are events that I am very glad I attended,” said Rick. Board members who are involved are rewarded with spectacular moments.