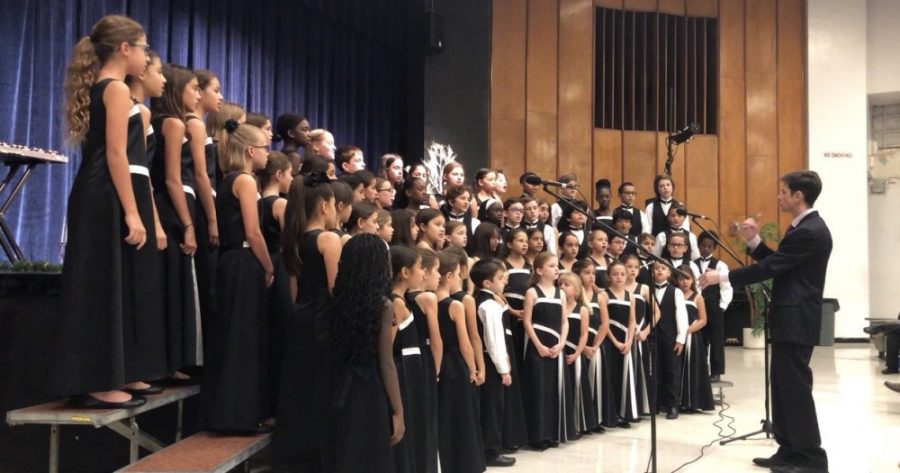 In 1999, Oliver Diez ’99, MM ’16 interviewed for the position of music teacher at Palmetto Elementary School — straight out of college. He was notably enthusiastic, sharing a single, seemingly impracticable goal: starting a concert band, a rare feat for an elementary school.

Twenty years later, Diez is cherished by his students, directs five different ensembles at the school and is the 2020 Francisco R. Walker Miami-Dade County Teacher of the Year. Diez, 43, was chosen from 19,000 teachers. He was honored at a ceremony Jan. 31 at the DoubleTree by Hilton Miami Airport Convention Center.

“This is a huge highlight in my career,” says Diez, who was voted Teacher of the Year at the school in 2002. “It’s not just an achievement as a music teacher, but as an educator on any subject, period.” Fellow FIU alumnus Eric Torres ’94, principal of Palmetto Elementary School, says: “I have not found a better teacher than him.”

During his practicum as a music education undergrad at FIU, Diez realized he wanted to teach at the elementary school level in order to lead children into a life full of music at an early age.

“I want them to leave elementary school with as much musical experience as possible,” he says. “I want them to see that music can be a great part of their lives even if they don’t go on to be musicians.”

Diez combines music history, literacy and appreciation into his lessons, also incorporating listening tests so students can familiarize themselves with popular pieces of music they hear everywhere, such as Beethoven’s 5th symphony and the William Tell Overture. He also makes an effort to introduce them to new genres and styles of music, whether it is African drumming, jazz or swing.

Thanks to a fellowship with The Johnny Mercer Foundation, Diez came back to FIU in 2014 for his master’s in music education. He also aspires to earn a Ph.D.

Diez says he worked under a supportive administration and maintains a great relationship with his the parents of his students, having two children of his own enrolled at the school.

“He has a great support from parents because of how invested he is outside of the classroom in his events, tutoring and ensembles,” Torres says.

The school has a performing arts not-for-profit to raise funds for instruments and equipment needed for Diez’s ensembles; parents regularly contribute.

Many of Diez’s former students have kept in touch with him through social media, updating him on their recent achievements.

“I’ve had kids reach out to me and thank me,” he says. “Some of them are now at New World School of the Arts and two years ago one of my former students was accepted into Julliard School of Music to play trombone,” Diez says.

In March, the concert band he aimed to start 20 years ago will be performing at Carnegie Hall in New York City alongside groups from other schools, adding to Diez’s many achievements as an educator.

But Diez says his biggest achievement is “the smiles on [his students’] faces when they are thinking ‘wow, we sound good.’”