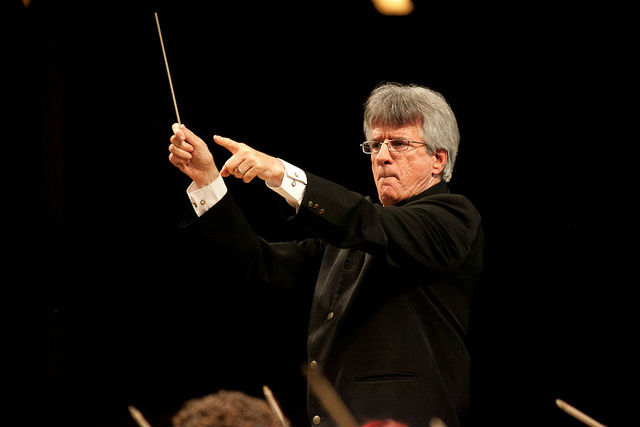 Maestro Carlos Riazuelo has returned to FIU to conduct the Symphony Orchestra for the first time since 2009 when he held the title of Director of Orchestral Studies at the School of Music.

Carlos Riazuelo is established as one of the most important Latin-American conductors, praised by audiences, musicians and music critics in many cities for his performances of a very varied repertory. While at FIU, he has been praised by South Florida Classical Review writer Larry Budmen as “leading a vibrant string ensemble with fervor” during a strong performance of Fredrick Kaufman’s Kaddish in 2006.

He was born in Puerto Cabello, Venezuela, from Spanish immigrants, where he studied violin and music theory. Riazuelo earned his first appointment as music director at the age of 23 with the Chamber Orchestra of the Universidad de Carabobo. After attending conducting seminars with Franco Ferrara in Sienna and Venice, Italy, and George Hurst in Canford, Great Britain, he completed the Post Graduate Certificate in Advanced Conducting at the Guildhall School of Music and Drama of London, Great Britain, where he received the Ricordi prize for opera conducting.

Riazuelo returned to Venezuela and was named Artistic Director of the Orquesta Sinfónica Municipal de Caracas, carrying out a varied and widespread work of Gala Concerts, Children’s Concerts, Pops Concerts, Street Concerts throughout the city, and pioneering old and new repertory, taking the orchestra to the front line of Latin-American orchestras. He has guest conducted both in Venezuela and abroad, with many outstanding local and international soloists. After a first experience with the great violinist Henryk Szeryng and the Beethoven violin concerto, the soloist himself chose Mr. Riazuelo to accompany him in what would be his last concert in Venezuela. Riazuelo was the only Latin-American conductor invited by the late Maestro Eduardo Mata to conduct the Dallas Orchestra, conducted in Dresden and Leipzig, Germany.

Moving to Madrid in 1998, he guest conducted in Madrid, Oviedo, Pamplona, Galicia, Cordoba, Malaga, Valencia, Palma de Mallorca, and concerts in France and Italy. Between 2005 and 2009 he taught at Florida International University’s School of Music as Head of Strings and Director of Orchestral Studies. In August 2009, he joined Louisiana State University School of Music as Associate Professor and Director of Orchestral Studies, while keeping his work as guest conductor with professional groups.

On Tuesday, November 17th at 7:30pm, he and Conducting Graduate student Jordan Cohen will lead the FIU Symphony Orchestra at the Herbert and Nicole Wertheim’s Performing Arts Center for the Distinguished Conductor Series in a program of Grieg, Haydn, and Mendelssohn. Also featured will be violin soloist Robert Davidovici who will perform Haydn’s Concerto No. 1 in C Major.

Tickets are available online at wpac.fiu.edu, by calling 305-348-0496, or by emailing wpac@fiu.edu. FIU faculty, staff, and alumni receive ticket discounts.