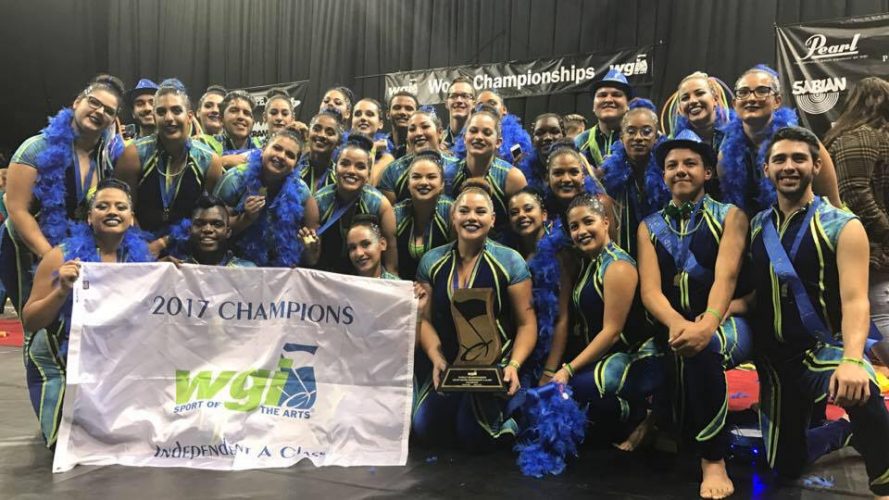 Proud Golden Panther Enrique Perez (’11) led the FIU Winter Guard to victory for the first time in its history, beating out 62 other teams competing for the coveted Gold medal in the Independent Category of the A Class Finals during the 2017 Winter Guard International Championship this April in Dayton, OH.

Previously a drumline section leader of the FIU Marching Band in 2005-06 and member of the FIU Winter Guard in 2006 – 07, Perez always wanted to give back to his alma mater. In 2015, he successfully interviewed for a position as color guard director with the FIU School of Music’s Wind and Percussion Coordinator and FIU Bands Director Barry Bernhardt. Shortly afterward, he began directing the competitive winter guard in 2016. According to Perez, “It was an opportunity for me to give back to FIU and guide the many young men and women who want to participate in this sport, while giving them the best experience possible.”

The season began with over 60 hopefuls from the Tri-county area auditioning for the team. “There is so much talent in South Florida and here at our very own FIU, which made my job as a director much more difficult to put the team together, but my staff and I are glad we chose this group composed mostly of FIU students and some from Miami-Dade College,” noted Perez.

Winter guard is the sport of the indoor color guard and is an auxillary program of the FIU Marching Band. Teams use a combination of flags, sabers, mock rifles, and other equipment, as well as dance and other interpretive movement to demonstrate technical ability. They compete locally under the South Florida Winter Guard Association and nationally under Winter Guard International (WGI).

In order to prepare for this year’s annual competition at WGI, members and staff gave up entire weekends from November until April to plan, practice, rehearse,  and perfect their 5-minute competition show, “The Road Ahead.”

“My design team and I spent weeks making sure we made the right design choices for the team. It finally came together after discussing a plethora of ideas and concepts. I listened to a soundtrack called Initiation by Tommy Emanuel and it spoke to me almost instantly. Slightly dark and mysterious, but fun and energetic at the same time. It was nothing like I’ve heard before and knew that this was it. We envisioned the future, a nightly car ride in the city, its busy streets and the people. We wanted our journey to tell a story of the night and our own interpretation of the future. The soundtrack, the choreography, the artistry, and the stage had to tell the story, and so, it was given the name, “The Road Ahead.”

After many months of dedication, hard work, commitment and a love for the marching arts, the team received a winning score of 97.905, making it the first time that the FIU Winter Guard received a medal in such a prestigious competition.

“We set a goal to make finals and had three great performances at World Championships in April,” remarked. Perez. “We made the right choices and worked hard every weekend. Winning the World Championship was just the cherry on top of an incredible undefeated season!”

To learn more about the FIU School of Music, click here.