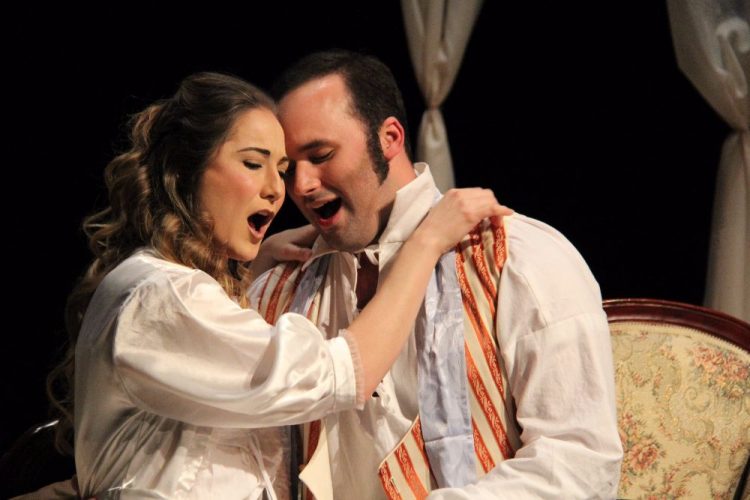 Premiered in Vienna in 1792, Domenico Cimarosa’s Il Matrimonio segreto (The Secret Marriage) became one of the most popular 18th century comic operas, having allegedly received the longest encore in operatic history. Based on a play called The Clandestine Marriage (by playwright George Colman the Elder and actor/playwright David Garrick), it was considered Cimarosa’s masterpiece and is one of his only works that is still regularly performed.

The FIU Opera Theater, consisting of all undergraduates this year, staged the two act opera buffa at the Herbert and Nicole Wertheim Performing Arts Center Mainstage Theatre this April 21 -22. A highlight of the FIU Music Series this spring, it also featured a 23-piece chamber orchestra conducted by Juvenal Correa-Salas.

For this production, Stage Director Robert B. Dundas transported the story to the early nineteenth century, telling the story of a rich merchant, Geronimo, who hopes to get his two daughters, Carolina and Elisetta, married to a nobleman, Geronimo, not realizing that one of them is already secretly married to his young secretary, Paolino. Sung in Italian with English supertitles, the comedy is a tangled web of arranged marriages, feuding sisters, romance, and misunderstandings which make this a feel-good opera.

“This is my first buffa role, says Melissa Iglesias (Vocal Performance, Senior), who sang the part of Carolina, the youngest daughter of Geronimo. “”I was challenged by the combination of acting, vocal technique, and collaboration with others, while learning to give myself as an artist. This opera was the single most gratifying experience of my life – both as a person and musician.” As Paolino, tenor Jorge Diaz (Vocal Performance, Junior) remarked on his growth as an operatic performer for the first time. “Performing this opera has definitely pushed my boundaries. I have grown so much in every aspect: artistically, technically, as an actor, and as a human being. It keeps you honest.“

The most comical role of the evening perhaps belonged to the expressive Fidalma, sister to Geronimo, who is also in love with Paolino. Performed by FIU’s only countertenor Edgar Sanfeliz-Botta, (Vocal Performance, Senior), he noted that “the role of Fidalma taught me how to break boundaries and always take risks.”

The FIU Opera Theater was founded in 1997 by Dundas in order to promote professional training and practical performing experience for student singers, conductors, and pianists, in addition to serving as a cultural service of the School of Music, the students and faculty of Florida International University, and the greater South Florida community. Students work with the professional coaching staff to learn the diction, musical styles, and interpretive traditions of each role. They also receive instruction in theater techniques to develop the basic acting skills required by an operatic performer including improvisation, dance & movement, character development, stage combat, basic stagecraft, make-up, costume & scenery design and construction, and stage management.