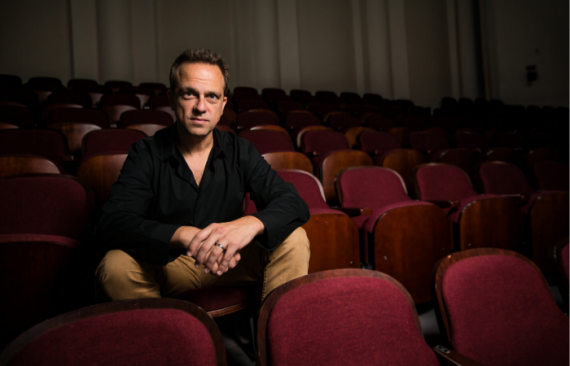 On Wednesday, March 25th, the New Music Miami ISCM Festival will host its 3rd annual alumni showcase that highlights graduates whose careers and music reflect the diversity of the FIU Music Composition Program.

The showcase will begin at 6:30pm and features award-winning composer Carlos Rafael Rivera ’96, who will speak about his first musical score for the Liam Neeson film “A Walk Among the Tombstones,” released last September.

Afterwards, the FIU NODUS Ensemble will perform music written entirely by FIU School of Music alumni composers in the annual “Welcome Back! FIU Alumni Composers Concert.” They include:

According to the festival’s founder and director Dr. Orlando Garcia, “many of our former students are either at or emerging towards the forefront of their field. Their return to interact with our current students and the audiences for our festival and other related events makes this concert and associated forums and master classes a very important part of our festival.”

One recent grad, Catalina Von Wrangell, recalls the world premiere of “Strings Attached,” her duet for piano and alto flute, last summer at the Cortona Sessions for New Music. “I remember all at once listening fiercely, not hearing anything at all, and then having my whole body shake. I remember holding on to the chair so tightly for fear that the sound of my bones rattling would affect the performance. Of course, no such thing happened! I am very excited to share this piece as part of the 2015 New Music Miami ISCM Festival. These are the moments I live for, chances to be heard.”

Past featured composers have included Juan Pablo Carreño, Pablo Chin, Erik De Luca, Jorge Grossmann, Juraj Kojs, Adalberto Yanes, John Parcell, and Daniel Manoiu. This year, the festival will welcome back Miami-based composer David Mendoza, whose works have been performed at festivals and conferences around the country including the SCI, SEAMUS, NYCEMF, N_SEME, Subtropics Experimental Music Festival, 12 Nights Miami, Festival Miami, and the New Music Miami ISCM Festival. Internationally, he has collaborated and premiered work in Buenos Aires, Argentina, and has continued to be awarded by ASCAP.

He advises current students “not to get bogged down with labels or the politics associated with them. Learn from the past and take what you want from it, but realize that you are free to explore and create new sound worlds.”

The selected alumni will have their pieces performed by the FIU NODUS Ensemble, the professional contemporary chamber music ensemble-in- residence at Florida International University in Miami. They specialize in the cutting-edge art music of our time. The ensemble’s repertoire includes recent music by composers from around the world, works written specifically for the ensemble, and works with electronics and/or video. The makeup of the ensemble varies for each concert depending on the works being presented. Featured performers will include Elissa Lakofsky, flute; Andrew Proctor, vibraphone; Mary Adeline Kauffman, piano; Mari-Liis Pak, violin, and Federico Bonacossa, guest solo guitarist.