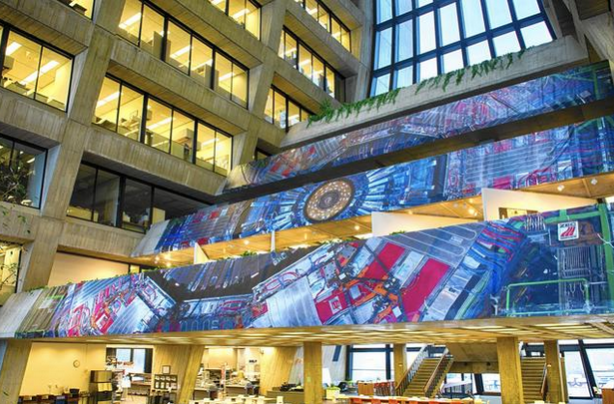 Xavier Cortada, Artist-in-Residence at the College of Architecture + The Arts, is making news in Chicago. The article below was written by Linda Giradi and originally appeared in the Chicago Tribune on February 5th, and can be viewed here.

Art and science meet at new exhibit at Fermilab

The thousands of particle physicists didn’t plan for their research to be a work of art.

The detector where the once-illusive Higgs Boson, an elementary particle of the universe, was discovered in 2012, however, is now an engineering marvel in the science and art worlds.

Artists and scientists have collaborated in an international exhibit at the facility that works to capture the beauty of science through various media.

The international Art@CMS exhibit opened Wednesday in the Art Gallery at Fermilab. Launched by physicist and photographer Michael Hoch, the exhibit will be on display in the Fermilab Art Gallery through April 22.The gallery is open 8 a.m. to 4:30 p.m. Monday through Friday.

Georgia Schwender, curator of the Fermilab Art Gallery, said the exhibit connects art and science for the non-physicist. Schwender said until a year ago the art gallery had been restricted by appointment after security-related concerns raised by the Sept. 11, 2001 terrorist attacks.

Visitors will see Hoch’s high resolution photographic banners that illustrate the enormity of the detector at the Large Hadron Collider at CERN in Switzerland. The experiment was built in a “cylindrical coil of superconducting cable” that is roughly the size of a five-story building that weighs 14,000 tons.

It was designed to measure subatomic processes produced by collisions of protons capable of taking 40 million pictures per second. It is one of the two particle detectors that enabled the discovery of the Higgs Boson.

The Vienna, Austrian-born physicist-artist’s life-size photographic banners of the detector hang horizontally in the atrium of Wilson Hall, as well.

“There’s an intrinsic geometry that just grabs you,” Hoch said. “There is beauty in science that we want to communicate to a wider group of people, at the same time inspiring them and making them curious to understand more about science.”

Hoch met with Fermilab scientists and the public during Wednesday’s art gallery reception. Fermilab physicist Paul Lebrun said he was impressed with the “great intensity and effort” by the artists in their pieces.

The occasion was an opportunity for the public to meet Fermilab’s first-ever artist-in-residence Lindsay Olson, who explored Fermilab from behind the scenes and created art pieces inspired by the work of scientists at the facility.

Fermilab physicist Don Lincoln, her science advisor, described Olson’s artwork as being “faithful” to the work of scientists.

“I am a very unlikely person to be discussing art and science with you,” Olson told the physicists. “I spent most of my academic career trying to avoid math and science but through a series of fortunate events, I fell in love with science and now science is the foundation of my studio practice and it is an important part of how I view the world.”

Visitors to the exhibit will see five banners by artist Xavier Cortada and physicist Pete Markowitz that show various stages of particle collisions recorded by detectors.

Cortada said the banners are an homage to the scientists and engineers whose research has opened up new avenues in science.

“Artists try to do the same thing. That is why we are such kindred spirits,” Cortada said.

“It is interesting to see the (it) from a different perspective,” Dolen said.