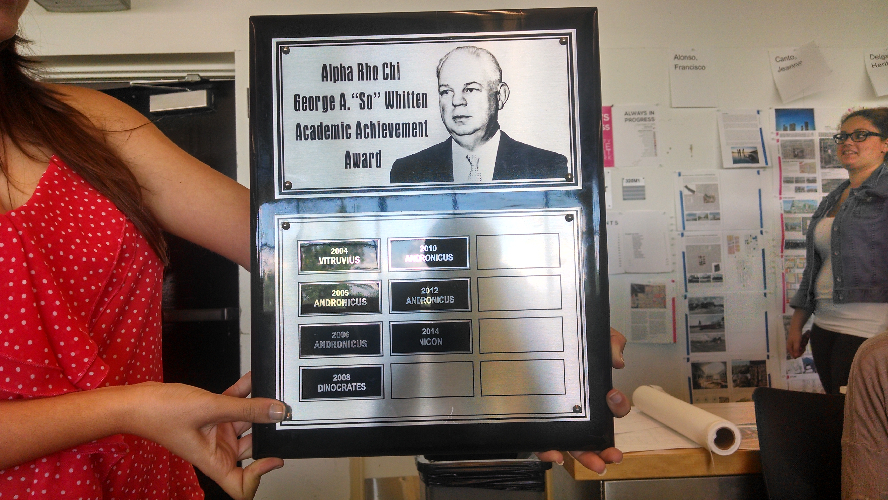 The national professional co-educational fraternity open to students in architecture and the allied arts, Alpha Rho Chi, honored Associate Professor David Rifkind with the organization’s highest award, the Gold Medal, at its centennial convention last week. Professor Rifkind was initiated into FIU’s Alpha Rho Chi chapter, Nicon, last year as one of two faculty brothers, along with Malik Benjamin, Faculty Advisor for the APX Chapter at FIU and Instructor/Director of Program Innovation at the College of Architecture + The Arts. The Alpha Rho Chi Gold Medal requires the approval of at least three-quarters of the fraternity’s chapters and alumni associations, which demonstrates the commitment of FIU students in recognizing their faculty. This is the first award of the Gold Medal in the past 15 years. Previous winners include I.M. Pei, R. Buckminster Fuller and Samuel Balen, FAIA.

FIU architecture student Eneida Piñon, the Worthy Architect of Nicon Chapter, was named one of three John R. Ross Scholars at the banquet celebrating Alpha Rho Chi’s centennial. Piñon was cited for her tremendous service to the her fellow students and to the university. Her award includes a scholarship of $2,500 from the Alpha Rho Chi Foundation.

The FIU Architecture, Interior Architecture, and Landscape Architecture students who comprise Nicon Chapter were recognized with the annual “So” Whitten Award as the APX chapter with the highest cumulative grade point average. The honor demonstrates our students’ commitment to academic excellence, alongside their collegiality and devotion to fostering an academic community.

This article was written by David Rifkind, Associate Professor and Malik Benjamin, Instructor and Director of Program Innovation, and posted by Juan Brizuela.