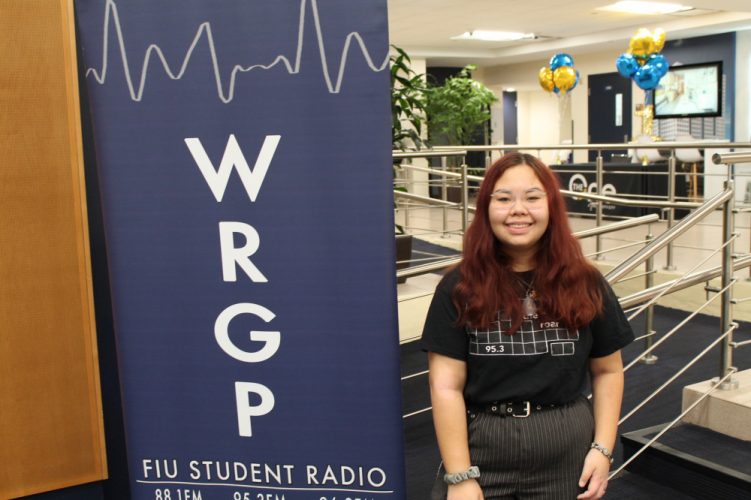 Meet CARTA freshman, Katherine Wong. Katherine moved to the US from Hong Kong during the Summer of 2018 and with an exciting and extremely impressive list of accomplishments with her. She currently works as a writer for PantherNOW and a DJ at ‘The Roar’; FIU’s student-run radio station, where she hosts “Eclectic” – a 1980’s to early 2000’s British pop/rock centered show every Monday from 4-5PM.

Why did you choose your major?
I chose my major because of my teacher in the 9th grade. He had us watch a 3-part documentary called “Inside North Korea”, where Vice founder, Shane Smith, documents his journey after a year and a half of trying to get into the country. I had never seen someone report on North Korea, let alone any type of reporting to that nature, and I had a gut feeling that I absolutely had to be a part of the action. Something clicked in my brain – I just knew that I wanted to be the first person to break the story out, no matter what it was.

Describe your experience in transitioning from Hong Kong to Miami.
It was definitely a wild ride. Moving from one side of the world to another is something I never really prepared myself for, even though I always knew I was going to be attending a university in the States, and eventually starting a life for myself here too. Having to adapt to a completely different life in America was definitely a challenge for me. Everything ranging from culture shock, a lack of public transportation, and customs were obstacles I initially faced. Most of what I missed about living in Hong Kong, was the complete independence I had. Being able to travel easily within the city was something I missed the most, as I had to rely on others to take me places because I can’t drive. Although it did take time to adapt, I eventually found myself making a home here.

What inspired you to get involved at PantherNOW, and The Roar?
The main reason I chose to come to FIU was because of PantherNOW and The Roar. I was accepted into many schools around the state, but the student media at FIU is what really grabbed me. Initially, I was only going to apply to PantherNOW, as I knew I was going to be a journalist, but I did not know what exact niche of journalism I wanted to go into. PantherNOW was going to be my way to explore each and every aspect of journalism that I could during my time at FIU. However, about a month after my acceptance, I attended III Points, a music festival held annually in Wynwood. It was there that I met a group of journalists who brought me backstage during a set from one of my favorite artists of all time – James Murphy of LCD Soundsystem. Because of that experience, I decided that I wanted to pursue music journalism, as I wanted to relive that moment and turn it into a career. With that, I joined The Roar – FIU’s student radio station, as I knew that combining working at the paper and the radio station would give me an edge and would be the first step in my career as a music journalist.

What was it like to intern for Hong Kong’s largest English-based newspaper, the South China Morning Post while in 10th grade?
Interning at the South China Morning Post certainly helped in maintaining my desire to become a journalist.  Being only 15 years old at the time, I was in awe of everything that I was doing, and it absolutely made a lasting impact on me. I shadowed a sports columnist for a week. Although he predominantly covered sports in Hong Kong, during my internship, we interviewed a restaurant owner and sampled food from 3 different restaurants across town. I was in charge of transcribing the interview and writing up an article on our mini food tour. Having that real-life, hands-on experience  I was also able to see what an actual newsroom looked like, and the editing side of an online publication.

How has your major helped you in your involvements on campus?
Because I’m heavily involved with student media, being a journalism major really helped. Although any majors can join student media, having a background in journalism certainly helped to further propel me into my work. Personally, I believe that if I were to be taking a different major, I would not be as passionate about what I do for student media.

What are your plans after graduation and do they involve the field you are studying?
After graduation, I plan on moving out of state to a larger city. Because of my upbringing in Hong Kong, I’m so accustomed to large and condensed cities that I feel quite out of place not being in one. My plans definitely involve the field that I’m currently studying. On top of that, moving to a city such as Seattle, Chicago, or New York can develop my career even further than if I were to stay in Miami. Because of my aspirations to work as a music journalist, I’m aiming to work for a larger music-based, journalism company. Whether that be at a radio station like KEXP or NPR, or at a music publication like Pitchfork or Consequence of Sound. However, that’s not to say that Miami does not have a well-established music scene, or that I’m immediately leaving Miami. I plan on doing the 4+1 program offered at FIU, this gives me the perfect opportunity to get a small taste of what lies ahead for me.

What kind of impact do you hope to make with the tools given to you through your major and/or involvements?
With my major and involvements, I can only hope that I’ve not only made an impact on the community we have at FIU, but to every single person I interact with. Through my involvement on campus, I’ve managed to make my voice heard, which in return has generated feedback. As a journalist, the only thing I can hope for with every single article I publish, interview I conduct, or event I cover, is that someone gains something from it. Being able to start a conversation about a topic that I cover can eventually lead to something much bigger is what drives me behind everything I do, and I can only continue to be the person behind that conversation starter.

What piece of advice would you give freshmen who are deciding what career path to follow?
As a freshman, it’s 100% okay not to know what career path you want to follow. One thing I’ve been told as a freshman, myself, is that I’m “bound to change my major” because every freshman does. Exploring your options doesn’t hurt, especially at an institution like FIU that offers over 50 majors. On top of that, FIU offers an exploratory major for those who aren’t exactly sure what they want to do yet. But, your major should not be the deciding factor towards your career path. Sometimes, you learn more about yourself and what career you want to dive into by joining clubs on campus – I know I did. FIU offers 396 extracurricular clubs, ranging anywhere from culture clubs to chess clubs.

Another thing I highly recommend is to network constantly. Speaking about your achievements, whether it be volunteer work or past internships can land you places you never thought you’d end up. The first step to actually establishing something in a potential career path is talking to people. Don’t be afraid to speak to someone at a tabling event, or even just in passing about what you’re trying to achieve. Chances are, they may just be the person who can get your foot in the door. For me, this has worked to my advantage, because I’m already in my career only halfway into my freshman year. If there’s one piece of advice you can take out from this; don’t be afraid to try out as many things as you can. You never know what you’ll find on campus.  Even if you have a sliver of an idea of what you want to do, go for it. You never know what you’ll find until you put yourself out there.