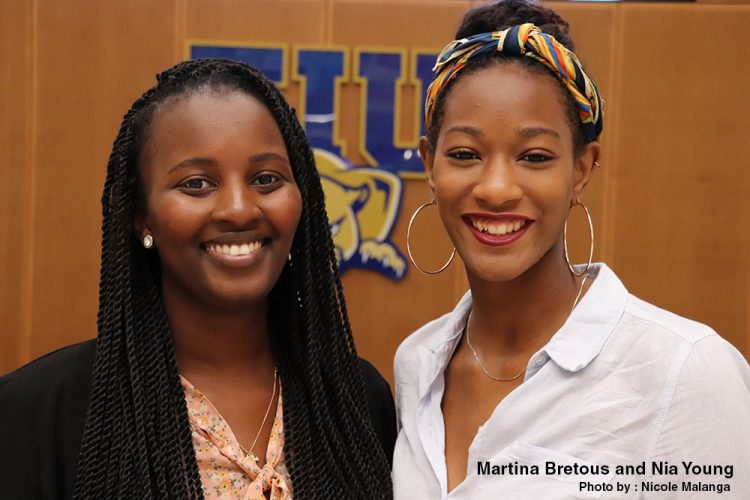 Martina Bretous and Nia Young are both leaders in FIU Student Media as well as CARTA Students and they have taken on projects to both improve their current positions as well as grow professionally.

Martina Bretous was born and raised in Port-Au-Prince, Haiti and moved to the United States in 2010 after the January Earthquake in Haiti. She attended Varela High School and remained there until graduation in 2012. At the University level, she is a senior studying Communication Arts, focusing on organizational communication and with minors in Marketing and Journalism.

Bretous is the Editor-in-Chief of FIU’s Student Media, which involves overseeing the production of content across its four sections (News, Opinion, Entertainment, Sports) both online and in its bi-weekly publication. She is responsible for setting the tone and vision for the year while implementing ways to increase its readership. She organizes regular workshops throughout the year for the Eboard, writers, and multimedia team.

As editor, Bretous’ goal is to increase Student Media’s visibility within the FIU community. She hopes to grow a wider audience by working diligently toward growing Student Media’s social media presence and increasing its digital content.

Nia Young is an out-of-state graduate student studying Architecture at FIU. She is from New York and grew up in the DMV (D.C., Maryland, and Virginia) area. She is in the last year of her master’s program and is expected to graduate May 2018.

Young worked for Student Media for a year before holding her current position as General Manager. As General Manager, she oversees on-air content, general upkeep of equipment, training for staff, and all web-based or social media releases. She also works closely with the talk shows produced by and aired on The Roar to ensure creative content that is catered to the FIU student experience.

As general manager, her focus is to connect with FIU students and listeners of The Roar by building a strong social media and web presence. This will give its on-air content a second life online and a chance to better connect with its target audience, FIU students.

Student Media is a student-run news organization at the University dedicated to informing the FIU community on all campus events including news, sports, and campus life. Student Media comprises three parts: Panther Press, the bi-weekly newspaper published on Mondays and Thursdays; PantherNOW.com, our online go-to stop for stories within Panther Press with web-exclusive content; and The Roar, the 24/7 student-run radio station.