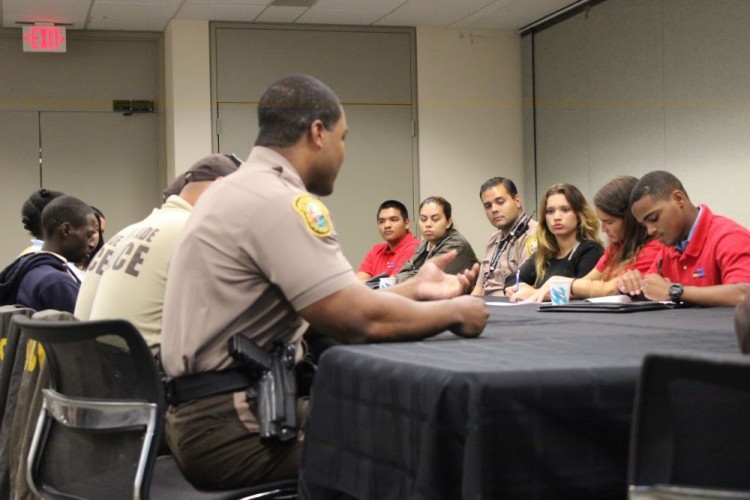 FIU Communication Arts students and their instructor Antoine Hardy are working with local high school students and Miami-Dade police officers to mend fences and build bridges. Relationships between young people and police officers can sometimes be fraught with tension, with both sides questioning the others’ intentions. Young people are in the process of finding their voice and often feel strongly about their right to assemble and to exercise free speech, and these desires can put them at odds with the police tasked with maintaining order and protecting the public. Recent deaths of individuals who had encounters with police have spotlighted these tensions and revealed the need for dialogue. Hardy wanted to find ways to facilitate conversations between police and young people in hopes of promoting understanding and mutual respect. As a young man of color growing up in North Carolina, Hardy himself had two conflicting images of the police. He respected the police as an institution, but too often saw individual officers who did not earn that respect. As a communication professional, he sought ways to facilitate community dialogues between the two sides and to generate discussions on various topics, including whether there were, in fact, two oppositional sides. Hardy teamed up with Miami’s District 4 Commissioner Francis Suarez‘s office and Communication Arts Community Engagement Coordinator Gabby Portela to organize a series of roundtable discussions with local youth and Miami-Dade police officers, with the goal of developing better relationships and improving communication between young community members and police officers.

The first community dialogue was held on February 25th and was facilitated by Hardy and the Communication Arts students, who were trained in small group communication. Participants included high school students from the greater Miami area and Miami-Dade police officers, all of whom volunteered to attend. The meeting provided a neutral space for the parties to gather and explore differing perceptions and discuss hot topics, including police training and conduct, youth conduct, race relations, community policing, protesting, and leadership.

During the two hour conversation, participants agreed that much of the resentment and confrontation with police stems from misunderstanding, and from confusion associated with police officers’ use of force. “I appreciate the job the police do, but their sometimes heavy-handed approach can lead to negative perceptions about their intentions,” said one of the student participants. Many of the officers were surprised at the amount of understanding and respect the students had for the police.

As part of the dialogue, police officers were also able to voice their perspectives. They discussed the experience of entering unknown situations, which can sometimes escalate quickly and require  them to make split-second decisions. They stated that the goal is often to take control of the situation first, and only after that, proceed to assess what is happening and who is involved. They acknowledged that this could be seen as aggressive by observers who might not consider the police officers’ responsibility. The honest communication and open emotion expressed by the police officers was eye-opening for the young people present and served to further break down the communication barriers and much of the tension.

After three meetings, Hardy sees real progress. He says the officers are beginning to let down their guards and trying to engage more with the teens. “Realizing that miscommunication plays a large role in the relationship dynamics is significant.  It shows that the disconnect isn’t malicious, it is just misunderstanding. My hope is that after this series of dialogues, the police officers will feel that their experiences and perspectives, which are rarely heard, have been acknowledged and appreciated. In addition, I hope that they gain a more nuanced understanding of the concerns and fears of young citizens, which ultimately can lead to more productive communication and partnership between police and youth,” said Hardy. Summing up the experience, Officer Juan Perez, Miami-Dade Police Deputy Director, said: “Activities like this are the solution. The fact that we can talk with each other and be informed becomes a starting point toward mending this relationship.”

News of the unique dialogues and the positive results are spreading. The Northside District Police Department will incorporate the program model into their new officer training beginning this fall. In the spring of 2016, seven Miami-Dade municipalities will begin offering the program led by Hardy and the FIU students as part of their officer training.

The last training in the current program will take place on May 27th at the Miami-Dade Government Center downtown from 4-6pm and will focus on community impact and engagement.  It is open to the public.

To learn more about the use of dialogue and civic engagement as powerful tools for positive social and organizational change in the community, visit the Communication Arts Department’s website.