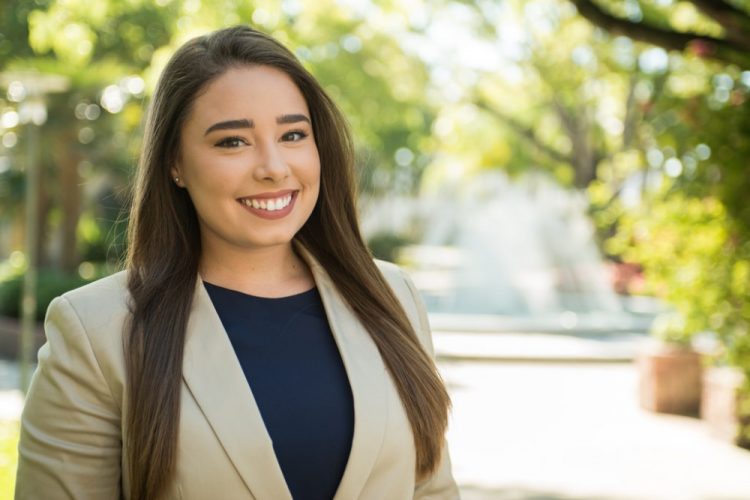 Krista Schmidt is a senior studying Communication Arts with a minor in Political Science and a pre-law certificate. She began her academic career at FIU in the Fall of 2014 and became involved in the Student Government Association (SGA) in 2015 as a Lower Division Senator and Head of the Student Advocacy Committee. Her passion for FIU and advocating for the needs of students led her to run for Student Government President.

At FIU, Schmidt has been involved with Alternative Breaks as a Site Leader, Dance Marathon Morale Captain, LeadTeam Facilitator, Phi Alpha Delta Pre-Law Fraternity, and Order of the Torch and she served on the executive board of her sorority, Delta Phi Epsilon. Her involvements gave her the opportunity to engage with a wide range of organizations and students on campus. Thus, she was recognized at the Student Life Awards as the recipient of the Outstanding Sophomore of the Year Award.

Why did you choose your major?
I chose my major because, as I was attempting to receive my Pre-Law Certificate, I was intrigued by the classes that were included such as Conflict Management, Rhetorical Communication, and more. These classes sounded like they would provide me with real world knowledge. I then learned about the major and I wanted to get more involved with it. I continued to take classes in the major and I knew that I needed to make the switch into it officially. I had a few sorority sisters that also took classes in the major. They told me that it changed their life and provided them with so many diverse opportunities.

How has your major helped you in your involvements?
My major has helped me in my involvements by helping me master my interpersonal skills. Many people overlook these key factors that are crucial to working with others and being a good leader. I also learned about different management styles while taking my Effective Leadership class. Public Speaking was also one of the most influential classes for my position. I have given at at least 30 speeches and those courses gave me the confidence to be able to speak to hundreds of people.

Have there been any professors/staff members that have solidified your decision to follow this major?
My professors Antoine Hardy, Lyanne Webb, Raquel Perez, and Victoria NG helped me solidify my decision. They made the classes interesting and opened my eyes to so many new concepts.

What are your plans after graduation and do they involve the field you are studying?
My plan is to attend law school. This major is not the conventional route, but it has taught me so many life skills that will be valuable for my future. I would recommend this major to others that would like to follow a similar path.

What kind of impact to you hope to make with the tools given to you through this major?
I hope to have a future of positive interactions with as many people as I can. I want to use these skills to take the time to understand everyone that I would work with and be the best leader that I can for them. I want to continue to help others develop and create happy and successful lives for themselves as well.

What piece of advice would you give Freshmen who are deciding what career to follow?
I would tell them to find something they are truly passionate about. Once they do that, they should speak to people in that career and learn from them. Finding mentors will open many doors for them.