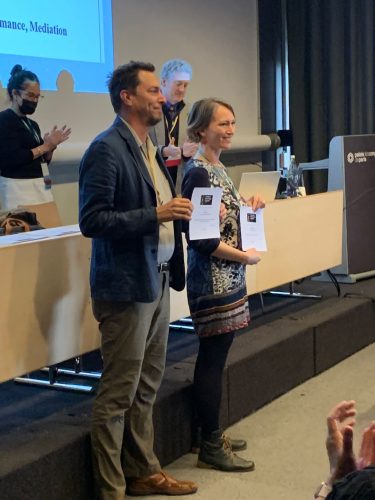 Associate professor, David J. Park, Ph.D., in the Department of Communication published an award-winning book detailing the ongoing climate crisis, and its exacerbation by mass media and widespread consumerism. Dr. Park has been teaching advertising and public relations at FIU in the School of Communication + Journalism (SCJ) as a tenured professor since 2013. His interests also include, but are not limited to, communication, new media technology, environmental stability, consumerism, and international communication.

Published under a sense of urgency back in September 2021, Dr. Park’s book “Media Reform and the Climate Emergency,” is a riveting, data-driven, call-to-action. The book presents a detailed examination of a hyper-consumerist society driven by unregulated mass media, the worsening effect it has on the ongoing climate crisis, and the reformations needed for humanity to have a change for the future.

Dr. Park’s book has received critical acclaim and so far, has been awarded as a runner up for Best Book from the International Communication Association’s Global Communication and Social Change Division—the largest and most prestigious professional communication association in the world—and a Silver Award for social sciences and education from the Nautilus Book Awards. It has also been nominated as a 2022 finalist for the Next Generation Indie Book Awards (Social Justice). In the book, he critically examines how advertising, the digital infrastructure, and journalism advance the climate emergency and lays out a path of reform to help create a more sustainable world;

CARTA News caught up with Dr. Park to talk about the inspiration for the book and this noteworthy achievement (Interview by Guido Gonzalez);

Describe the reformation needed for mass media. To what degree in terms of scale, and through what kinds of methods, will this potential reformation need to be achieved, and how soon?

My new book outlines much needed communication reform measures. Giving the advertising system an immediate environmental purpose can help mitigate the crisis and this is something the Intergovernmental Panel on Climate Change (IPCC) has been asking scholars to research for years. The internet is the world’s largest commercial surveillance structure, and it uses the data it collects to create individualized persuasive messages with the goal of increasing our consumption.

Global per-capita consumption has tripled over the past few decades. This is occurring while scientists are telling us we need to decrease our consumption if we want to save the planet. Rebooting the internet back as a public utility that allows individuals to control their own online data will start to help. However, the amount of energy required to power our online infrastructure is ultimately unsustainable.

For journalism, reinvesting in local and national non-profit, non-commercial news media free from commercial and governmental interference will help improve coverage of the crisis. Time is almost out. Basically, reforms in all industries should have taken place years ago.

How do the three areas of Mass Media—advertising, digital infrastructure, and corporate-backed journalism—contribute to such a widespread, self-interested, consumerist behavior? How can they be successfully countered?

The challenge with this organization is that the production and consumption of goods and services in consumer societies are central to the creation of greenhouse gas emissions, which significantly contribute to the global heating crisis. Individual consumption in consumer-oriented economic systems accounts for the majority of emissions, while indirect emissions generated from the production processes of goods and services account for the highest percentage of harmful emissions. Most of the West overconsumes. Consumer societies constitute the foundation by which human-made global warming is occurring, and much of mass communication is either dependent, or closely tied to the success of this societal organization.

Advertising is the field’s main offender. Advertising creates demand to meet production and to increase consumption. Advertising developed as a business transaction devoid of any social or environmental purpose. So, whatever happened to the product or service to be advertised before the advertising transaction or after the transaction doesn’t matter. For example, the media can advertise a product that pollutes the environment, exploits workers, and contributes heavily to greenhouse gas emissions. The advertising system is regulated to ignore these factors. What’s the solution? Give advertising a social and environmental purpose and immediately place fees on products and services that contribute to the climate emergency as an incentive for manufacturers to create more sustainable production processes. The IPCC has been looking for something like this for quite some time now.

Regarding commercial journalism, or what’s left of it in the US, pretty much everyone at this stage knows it’s in a major crisis. There are too many challenges and contradictions within its ownership structure and funding mechanisms to effectively address the climate crisis. It’s a structural problem. Having an information system dominated by a very small number of extremely wealthy and powerful conglomerate corporations whose main goal is profit runs counter to any theory that examines media and democracy.

We also have maybe one out of three journalists left from the past few decades. The reform goal is to decouple journalism from the challenges and contradictions by reinvesting in national and local non-profit public journalism/media. The US spends some of the least on its public media compared to all other Western countries. Today it spends around 500 million dollars, compared to another point in our history when the government invested roughly 45 billion (in today’s dollars) in fostering a more democratic media system.

What other obstacles, be it social, political, cultural, etc., are hindering the effort to counter the Climate Crisis?

There are a lot of obstacles. The United States has slipped off of the list of fully functioning democracies during the past few years according to the well-known Democracy Index from the conservative Economist magazine. Our economic system seems to benefit a very small percentage of our society at the expense of the majority. Our political parties aren’t investing enough in creating a livable and sustainable world. Our news media and mass communication infrastructure are no doubt heavily influenced by these variables. Power groups like the fossil-fuel industry also spend a ton on misinformation campaigns designed to scare citizens away from enacting helpful policies. Sadly, these trends translate into delayed government regulation that can address the crisis.

Can moderation–in regard to the consumption of media, resources, and goods–be possible, and if so, how (or not)?

Yes – the wealthy overconsume the most and expend about a third of greenhouse gas emissions due to their exorbitant lifestyles, yet they constitute a much smaller percent of society. So, economic inequality is part of addressing climate change. The US and Europe also overconsume compared to most people outside of the West. It’s important to remember that individual behavior can make a difference, but ultimately governmental policies will be more successful in terms of lowering greenhouse gas emissions to levels that may support some level of longevity for the planet.

Do you see any initiative for the climate crisis being taken and implemented on a larger scale, and could it help?

The Green New Deal would be helpful, but time is running out. It’s challenging to find discussions of carbon fee initiatives in politics and the media. The benefit of what I propose with altering advertising systems is that they can act as a de facto carbon tax by incentivizing manufacturers to change their production processes. Local people may have more control over this, and reforming advertising systems may be easier to move through compared to carbon tax initiatives. This is a new strategy for activists, concerned citizens and politicians to consider. At this stage we need to try anything that could decrease harmful gas emissions.

Given the growing concerns over misinformation, conspiracies, and denialism, how were you able to research and acquire the necessary data for your book, and how do you hope for this information to reach out to your audience?

It took me years to think and write about this book, but I wrote it as fast as possible given the urgency of the crisis. Everyone in every field needs to throw in ideas now about how their fields can help. The challenge with mass communication research that highlights the need for media reform is that the media are generally not interested in it. Authors need to find alternative and independent media to get their ideas out there.

Regarding misinformation, a recent study found there are 4,556 individuals tied to 164 organizations in the United States that spread misinformation and disinformation about climate change. The fossil fuel denial industry funds several misinformation strategies to confuse the public, while simultaneously influencing opposition to government regulation of industries that can help mitigate the climate crisis. They spend about $195 million a year on branding campaigns that suggest they support action against climate change while simultaneously spending massive sums of money to prevent action against global warming.

One study found they invested over $1 billion of shareholder funds during the three years following the Paris Agreement on misleading climate-related branding and lobbying. Much of this has been spent on influencing media and social media, as well as on opposition to climate related ballot initiatives. Their main aim is to counter any effort to regulate greenhouse gas emissions because their businesses are deeply involved in the fossil fuel industry.

What will happen if this “status quo” continues, and little to no action is taken as soon as possible?

Quite simple, science suggest this is an existential problem for the human race.