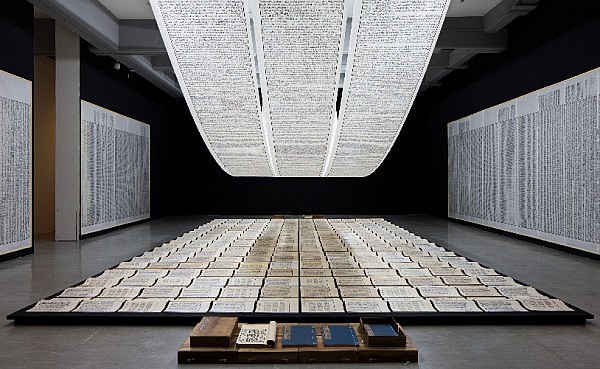 World acclaimed contemporary Chinese artist Xu Bing will open his exhibition Writing Between Heaven and Earth at the Patricia & Phillip Frost Art Museum on Saturday, February 21st. The exhibition is curated by Dr. Lidu Yi, Assistant Professor at the College of Architecture + The Arts.

The character shu in ancient Chinese signifies books, written characters, and the act of writing. This solo exhibition presents the shu art of Xu Bing (b. 1955), the world acclaimed contemporary Chinese artist, from his Book from the Sky to Book from the Ground and Landscape Landscript in between. All these shu masterpieces demonstrate the art of writing as image. Together they create a Zen-like textual space drawing the audience into an artistic contemplation of the works while arousing their latent cognitive capacity to communicate with the works. The interactive educational work, Square Word Calligraphy, uses components of Chinese characters. The work, created in a classroom setting, is a perfect fusion of eastern and western culture into one harmony. All these thought-provoking works of art will not only challenge the viewers’ preconception about written language and cultural identity, they will also invite them to interact with the art. This exhibition is designed to serve and educate people of different cultures and nationalities with his art. “My aim is to make an art that truly serves the people.” (Source: Patricia & Phillip Frost Art Museum)

In addition to the exhibition, Xu Bing will conduct an Artist Lecture on Saturday, February 21st from 4:00PM-5:00PM at the Graham Center, Room 140. He will also conduct a workshop with 5th graders on Monday, February 23rd.

Xu Bing was born in Chongqing, China, in 1955 and grew up in Beijing. After spending two years working in the countryside during the Cultural Revolution, he enrolled in 1977 at the Central Academy of Fine Arts in Beijing, where his studies focused on drawing and printmaking. He gained international recognition in the late 1980s with Book from the Sky, a monumental installation composed of books and scrolls printed with what appear to be traditional Chinese characters. The texts are illegible, however, because all the characters were invented by the artist, exposing the unreliability of the written word as a primary vehicle of communication. Xu Bing moved to the United States in 1990, where his work has continued to focus on written language. In 1999 he was awarded a MacArthur Fellowship for “his originality, creativity, self-direction, and capacity to contribute importantly to society, particularly in printmaking and calligraphy.” His work has been exhibited in China, Japan, Australia, the United States, and all over Europe. In 2008 Xu Bing was appointed vice president of the Central Academy of Fine Arts in Beijing; he now divides his time between Beijing and New York. (Source: The Morgan Library & Museum)

The header image is: