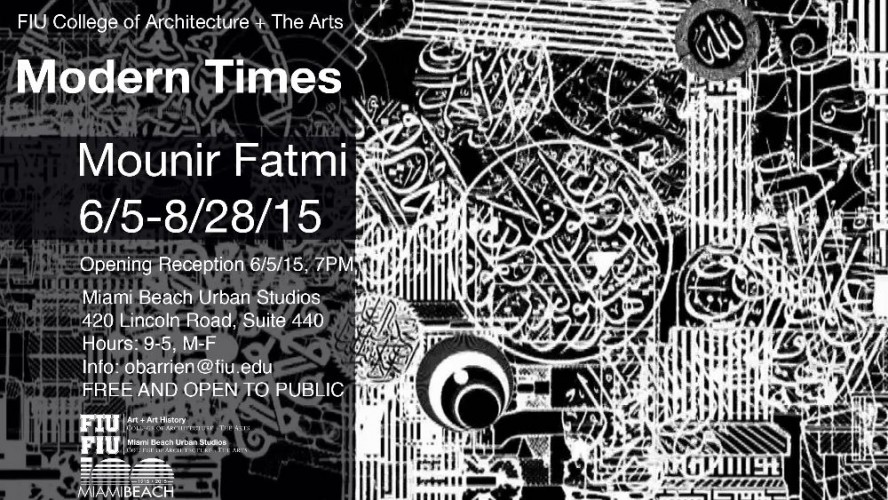 Modern Times – an exhibition by international contemporary artist mounir fatmi at The College of Architecture + The Arts | Miami Beach Urban Studios – will have its closing reception on Friday, August 28th. This exhibition by mounir fatmi is the artist’s first in South Florida, and it has been running for twelve weeks at the Urban Studios in the FIU Department of Art + Art History gallery.

mounir fatmi is a prolific creator and exhibitor. When surveying his body of work, what becomes evident is that he is very comfortable as a multi-media image-maker of exceedingly powerful messages. He encourages discussion about ongoing conditions of global terror, violence and censorship. His provocative artworks have an exceptional resonance and quality, triggering necessary considerations of what living-in these days entails. Designed as a sound sculpture and video installation, Modern Times consists of a trio of profound narratives. Made as direct responses to a single mortal vendetta, the sometimes heartbreaking futility of revolutionary social change, and censorship that is born from fear, the works elucidate personal strength, vulnerability, resistance, and protest.

The three displayed video works – “Modern Times – A History of the Machine (2010),” “Sleep-Al Naim (2005-2012),” and “History Is Not Mine (2013)” – illuminate the intersecting areas of current socio-political events, societal conventions and pressures, and our individual reactions to them. fatmi taps into the rich emotional spectrum of our provocative contemporary life. No matter whether the artworks “document” the author – who was cast into the shadows of a longstanding fatwa – evoke a locomotive to nowhere with uncountable moving parts made from Arabic calligraphic writings and verses, or dramatize a response to dogma and suppression, all the videos in this triumvirate appear as challenges to pay-forward activation and dialogue.

fatmi’s exhibit has encouraged community events at the Urban Studios that relate to the artist’s work. On June 26th, the Urban Studios ran an educational program that included a public screening of Charlie Chaplin’s 1936 film Modern Times and a discussion about the film. On July 31st, the Urban Studios hosted a FIU Master of Fine Arts drawing event in the gallery, which was also open to public viewing. This was designed as a response to fatmi’s Modern Times: The Fall video.

mounir fatmi is Moroccan, born in 1970, and resides both in Paris and Tangier. mounir fatmi constructs visual spaces and linguistic games. His work deals with the desecration of religious objects, deconstruction and the end of dogmas and ideologies. He is especially interested in the idea of ​​the death of the consumer object. His work has been featured in numerous solo exhibitions at the Migros Museum, Zurich, the Musée Picasso in Vallauris, FRAC Alsace, the Fondazione Collegio San Carlo, Modena, the CCC in Tours, 2014 and MAMCO in Geneva in 2015. He participated in several group exhibitions at the Centre Pompidou, Paris, Brooklyn Museum, New York, Museum Kunst Palast, Düsseldorf, Mori Art Museum, Tokyo, Museum on the Seam, Jerusalem, Moscow Museum of Modern Art, Mathaf, Arab Museum of Modern Art, Doha, Hayward Gallery, London, and the Beirut Art Center. His installations have been selected as part of several biennials, the 52nd and the 54th Venice Biennale, the 8th Sharjah Biennial, the 5th and 7th Dakar Biennial, the 2nd Biennial of Seville, the 5th Gwangju Biennale, the 10th Biennale de Lyon, the 5th Triennial of Auckland and Fotofest 2014, Houston.

He has received several awards, including the Biennale of Cairo in 2010, the prize URIOT, Amsterdam,, and the Grand Prix Leopold Sedar Senghor of the 7th Dakar Biennial in 2006.

Modern Times by mounir fatmi will close with a reception on Friday, August 28th, 2015 at 7PM at The College of Architecture + The Arts | Miami Beach Urban Studios: 420 Lincoln Road, Miami Beach, FL 33139. Free and open to the public.