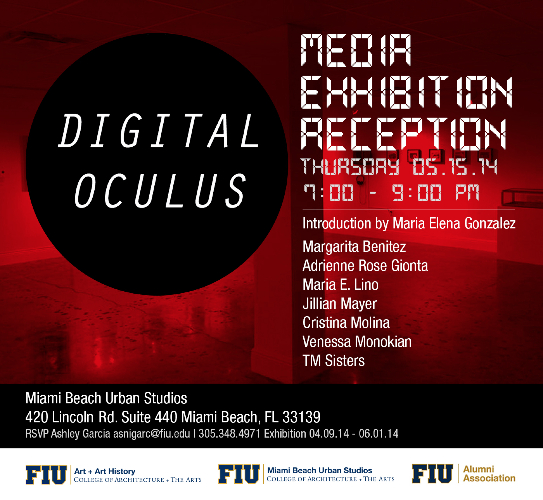 The FIU Art + Art History Department presents Digital Oculus at The College of Architecture + The Arts Miami Beach Urban Studios. The exhibition features the work of women artists that take a versatile approach to digital media.

“The term ‘oculus’ historically references a circular opening used in architecture to illuminate interior spaces,” said Jacek J. Kolasinski, curator of Digital Oculus and Chair of the Art + Art History Department. “It was thought to evoke a connection between spiritual and material worlds. In its contemporary context, ‘oculus’ may denote digital devices engaging corporeal and virtual realities.”

Digital Oculus represents a greater narrative woven by the technological touch. Whereas tapestries in the Medieval era were produced with needle and thread for the purpose of storytelling, the works in the new Miami Beach Urban Studios exhibition are produced with pixel and digital fiber. The women artists have used visuals and applied concepts that depict daily occurrences, whether through the rhythmic movements of a woman cooking on a wood-burning stove in the northern Andes of Peru, or through a glimpse into the digital world and its effect on personal identities. As a mode of narration, the work by the artists in Digital Oculus transforms into a collective oculus, a window through which many may interpret daily occurrences.

On May 15th, a reception will be held for Digital Oculus, with an introduction by Maria Elena González (BFA ’80).

The artists featured in Digital Oculus are:

The reception for Digital Oculus will take place on Thursday, May 15th, 2014 at 7PM at the College of Architecture + The Arts Miami Beach Urban Studios: 420 Lincoln Rd. Suite 440, Miami Beach, FL 33139. Free and open to the public.