Don’t be surprised if you find the main entrance to FIU’s Miami Beach Urban Studios blocked during the month of September. It is the result of a new solo exhibition by Paul Donald.

On Friday, September 6, MBUS will open the exhibition, which is organized and curated by the Art + Art History Department’s Dr. Alpesh K. Patel, Assistant Professor and Director of FIU’s MFA Program in Visual Arts.

“Like most children, I enjoyed arts and crafts, but for some reason, I persisted with it into adulthood…” said Paul Donald.

Donald was born in New Zealand in 1965. After growing up there, he lived in Australia for nine years, lived in the United Kingdom for about four years, and now currently resides in Montreal. His solo exhibitions have been hosted at galleries such as Sydney’s James Dorahy Project Space, Los Angeles’ CB1 Gallery, and Toronto’s Akau Inc.

Donald is most known for work that involves – what he considers – “three relatively simple components[:] cartoons, ornamental furniture and geometric abstraction….” Thus, his upcoming project at MBUS seems like a turn in a slightly different direction. 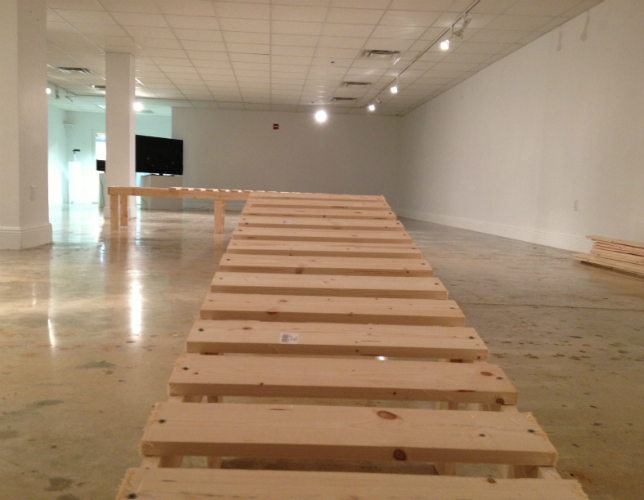 “I will build a wooden boardwalk across the gallery, which will start at the entrance opposite the main entrance,” said Donald. The boardwalk, as he explained, will end at the main entrance of MBUS. At that end, televisions will accumulate in number as Donald works on his piece. These TVs will play the day’s action in the gallery, including Donald’s own artistic activity. “The audience will not be able to enter the space because of the televisions and other paraphernalia blocking access, but they will have some view of what the artist is doing either by peering past the televisions or by watching the recorded footage playing on them. The side entrance will be blocked by boards but will have some small holes as viewpoints cut into it, through which the audience may look into the room.”

Donald wants to point out, however, that upon his arrival at MBUS, the ideas surrounding his project might change. The space of the gallery will affect the layout and timing of his work. Hence, Donald may surprise even himself during his creative process.

Nevertheless, the artist wants viewers to focus on the relationships between artist, artwork, and audience.

“Funnily enough, I am quite interested in maintaining a sense of distance between myself and the audience!” said Donald. “…I think a sense of distance can be productive….[I]f there is a sense of distance among each or any of the three elements – artist, artwork, and viewer – then I believe there exists a cognitive space which allows room for each of the persons involved to conduct ‘experiments of thought’ under her or his own terms.”

This project becomes not only an experiment for MBUS visitors, but also an exercise for the artist himself.

“I am as much an ‘audience’ for my own work as a perfect stranger might be, and, as such, my work is an exercise in…practicing empathy for ‘the other’ and an open call for the exercise of imaginative possibilities of this, albeit unknowable, ‘other.’”

Dr. Patel, who discovered Donald during his doctoral studies in England, enjoys giving an artist the freedom to express in any way and through whichever medium possible. By curating Donald’s solo exhibition, Patel involves himself in a thought-provoking show. He noted how the artist’s work at MBUS is upfront and, in its own way, daring.

“[Donald is] overtly blocking our access to not only the artwork, but also the artist…” said Patel. He’s really blocking you from seeing something that you’re thinking you should be able to see. That’s kind of frustrating, I think …and he’s working off [of] that frustration.”

With the help of Patel, Donald is also fulfilling an artist’s residency at FIU. The artist will discuss his own background and knowledge with students in the Bachelor of Fine Arts program.

Patel said, “We wanted the students to be able to benefit from him being here.”

In reflection of his upcoming residency, Donald said that he expects to “share [his] particular approach to art making, not as the only way of doing things, but as one possible approach amongst many.”

He said, “While I will come with a great many things of my own to say, I also expect to interact with the students in much the same way I conduct my art practice, which is to say I am looking forward to working with them as they are, in all they accept and resist.”

The Opening Reception for the Paul Donald Solo Exhibition will be Friday, September 6 at 7:00PM, at Miami Beach Urban Studios: 420 Lincoln Rd. Suite 440, Miami Beach, FL 33139. Free and open to the public.

For more information on the Paul Donald Solo Exhibition, visit the event page on Facebook.