The Radical HIVE is a project in three parts:  Research | Exhibition | Symposium.  Its focus is paradigmatic urban housing projects built in Latin America from the mid-twentieth century to the present – and the corresponding European and Asian lineages from which they emerged through the post-war legacy of CIAM and Team X.  The project highlights the multiple facets of design and construction, which together produced fertile ground for experimentation, each in resonance with the work of Le Corbusier in the Unite d’Habitation.

The implications for contemporary practice of the large-scale urban planning and social housing projects produced in Latin America during this period include the establishment of discernible legacies for urbanism, for housing affordability and accessibility, for manufacturing systems and processes, for construction and assembly systems, for urban social resilience and community planning strategies, and, in short, for the social, economic and environmental sustainability that contemporary architects address in the creation of the built environment.

The exhibition at the Miami Center for Architecture & Design includes models and materials documenting 35 international social housing projects of the period.  Although a clear lineage to the European models is evident in the Latin American examples, each expands upon its precedents through the incorporation of local nuances and the clear intent to forge a strong South American identity. Two examples among many are the Conjunto Habitacional Soldati (Estudio STAFF / Teresa Bielus, Jorge Goldemberg, Olga Wainstein-Krasuk in Buenos Aires) and the Pedregulho and Gavea complexes (Alfonso Reidy in Rio de Janeiro).

Exhibition materials will form the backdrop and context for a symposium, to be held on February 20th 2016, at the FIU College of Architecture + The Arts | Miami Beach Urban Studios (420 Lincoln Road, Miami Beach) from 1PM-6PM.  Discussion will focus on the challenges and opportunities historically and presently inherent in the design and construction of affordable, accessible, resilient urban housing across the Americas. The roster of panelists will include: Ana Paula Koury, University of Sao Paulo, Brazil; Patricio del Real, Museum of Modern Art, New York; Margi Nothard, Glavovic Studio, Fort Lauderdale; Umberto Bonomo, Pontificia Universidad Catolica de Chile; and Alastair Gordon, Distinguished Affiliate, FIU College of Architecture + The Arts. Eric Goldemberg and Marilys Nepomechie will moderate the panel discussion. 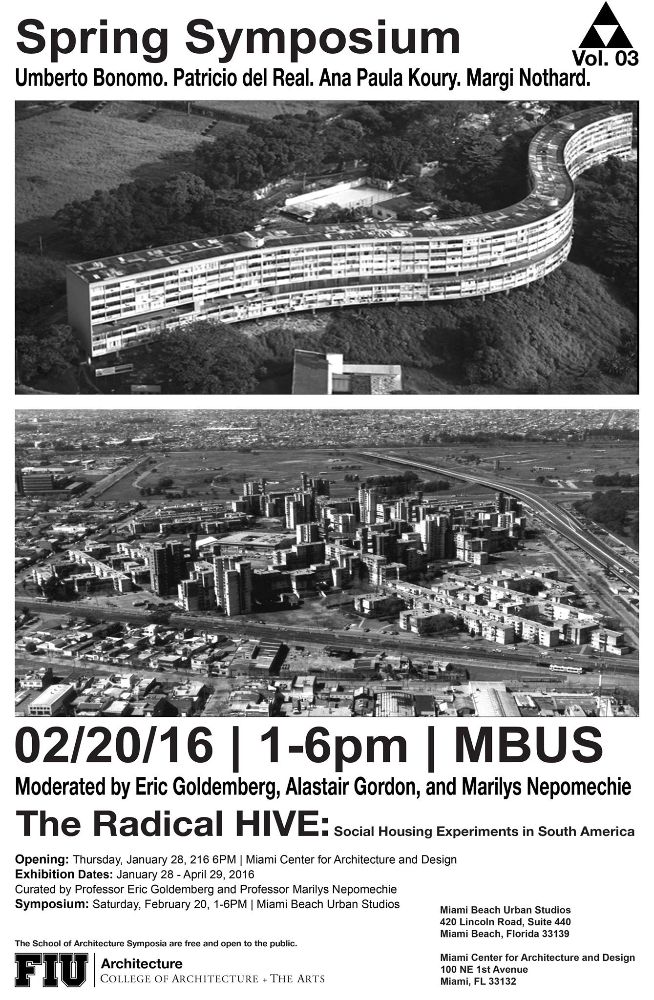