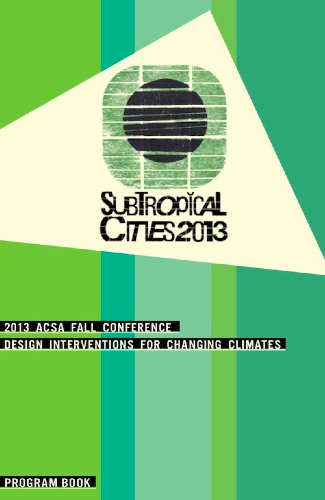 Between October 17th and 18th, College of Architecture + The Arts Professors Marilys Nepomechie, Marta Canavés, Gray Read, Nick Gelpi, and Thomas Spiegelhalter presented their peer-reviewed research projects at the 2013 Association of Collegiate Schools of Architecture (ACSA) Regional Conference. The fall conference, called “Subtropical Cities,” was held at Florida Atlantic University and was hosted by FAU, Broward College, and Queensland University of Technology. “…All of the research projects address the development of resilience in the built environment,” said Professor Nepomechie, “at scales that range from the urban to buildings, materials, and fabrication.” “Subtropical Cities” focused on how efforts such as those made by the FIU professors are being put at the forefront in urban, coastal cities. An important factor of these efforts is an emphasis on designing buildings that promotes community and efficient, sustainable construction methods.

The following presentations were given by the professors of the FIU Department of Architecture:

2. “Compelling Evidence of Premeditation – Mocking The Museum” by Nick Gelpi

The featured image was provided by the Association of Collegiate Schools of Architecture, and altered for this article with permission by ACSA Membership Manager Danielle V. Dent.

PrevPrevious StoryFIU Architecture Program Ranked Among the Top 25 in the Nation!
Next StoryArchitecture Professors Vassigh and Spiegelhalter Present Work at the ISES Solar World CongressNext